Abbie Greaves is the author of the new novel The Silent Treatment. She lives in the U.K.

Q: How did you come up with the idea for The Silent Treatment, and for your characters Frank and Maggie?

A: I first had the idea for The Silent Treatment when I read a newspaper article about a man in Japan who hadn’t spoken to his wife for 20 years. As a result, their 18-year-old son had never heard his parents speak to one another and he reached out to a television crew to try and stage a reunion.

I couldn’t stop thinking about how a silence could settle at the heart of a relationship, particularly one of this length.

Although I knew I wanted to explore the idea of pressing mute on a marriage, I also knew that I wanted to examine it in a very different situation – what if there was all the same kindness and respect, it was just speech that had disappeared? Could love really speak louder than words?

From there, the characters of Frank and Maggie quickly followed. I knew that theirs would have to be a union that had endured its fair share of strife before the trauma that steals Frank’s voice, otherwise it might seem too easy to call it quits on their marriage when the silence descends. 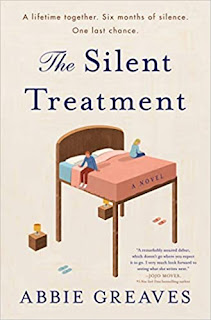 A: I always knew how the novel would end because without a compelling reason for Frank’s silence, one so large that both he and Maggie struggle to even comprehend it, I would have had no idea how to begin to write their story.

I hope that when readers reach the end of the book, they will find the resolution authentic and both heartbreaking and redemptive in the same breath.

In terms of the overarching plot, however, there were a lot of changes. The structure of the second half of the novel in particular was overhauled completely – twice!

As a novelist, I find plotting and pacing the hardest challenges. The Silent Treatment is a love story, but it also has a mystery running through the narrative, so I did a lot of redrafting and revising to make sure that there were enough “reveals” to keep the reader’s attention.

The last thing you want is for people to start skipping pages in the middle of the book!

A: The title has remained the same throughout the writing and editing process and it was, in fact, one of the first elements of the book that I pinned down.

The Silent Treatment immediately catches the essence of the story – it’s about a couple who have stopped speaking – but yet it is only the tip of the iceberg. Frank may be quiet, but his love for his wife speaks as loudly and as clearly as ever.

There is also an assumption that silence is by definition cruel.

And while this is sadly so often the case in the context of relationships, in The Silent Treatment, we come to see that Frank resorts to silence as a form of misguided kindness, as a means to protect Maggie at all costs.

He can’t stand to lose his beloved wife and he is worried that what he has to say will do more damage than not saying anything at all.

Phrases which have made their way into the cultural imagination, such as The Silent Treatment, will always appeal to authors; for me, writing the novel was a perfect excuse to think about why this concept fascinates us so much and it has completely changed my own approach to silence, romantically and otherwise!

A: I hope that Frank and Maggie are the sort of characters that readers will take to their heart and continue to think about long after they have turned the last page. Perhaps it will also make readers think about their own loved ones and what might go unsaid in those relationships.

And, of course, I mainly hope that readers will enjoy the story!

A: I’m working on my second novel – The Ends of the Earth. It tells the story of Mary O’Connor, a woman who has spent every evening for the last seven years standing alone outside Ealing Broadway train station, with a sign bearing the words “Come Home Jim”. But who is Jim and where has he gone?