Alexandra Chang is the author of the new novel Days of Distraction. She is from Northern California, and she lives in Ithaca, New York.

Q: How did you come up with the idea for Days of Distraction?

A: I drew a lot from my own life. Like the narrator, I used to work as a technology reporter, and I moved across the country with my then-boyfriend, now husband. I was a few years out from those experiences, and was interested in fictionalizing what I’d experienced. From there, it took its own shape.

Q: How would you describe the relationship between your narrator and her boyfriend?

A: The relationship, like most relationships, changes and fluctuates through time. At times it’s loving and healthy, and then there are moments when it’s fraught. They go through the bumps and trials of being in an intimate relationship, having their lives so intertwined. Those struggles come up.

For the narrator, she starts to question the relationship after having moved across the country for her boyfriend. It’s an act to her that carries a lot of meaning, and puts weight, almost pressure, on the relationship.

Overall, they have a decently healthy but still complicated relationship, for reasons on both sides. 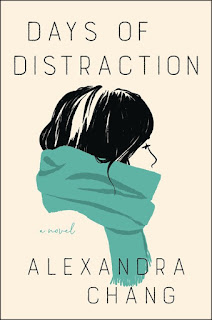 A: The title originally was Distance. That was too vague. This book for me is a lot about distances between people’s experiences, realities, and histories, and how it affects their relationships.

My editor said we should come up with a more striking title. I eventually landed on Days of Distraction—it more captures this time period of the narrator’s life. She is in her mid-20s, and for many of us, we’re still figuring out our place in the world and can become distracted by decisions. And it speaks to her work in the technology industry.

Q: The Kirkus Review of the book says that “stylistically, [your] debut novel can be seen as a collection of linked microfictions.” As someone who’s written short stories as well as this novel, what do you think of that description?

A: I liked it. It’s written in these fragments, vignette style. I was concerned with each fragment being able to stand on its own as much as possible. Some are microfictions. For the fragments that are more like microfictions, the short story form is really helpful—having a limited amount of space to convey the story and the emotional effect.

Writing short stories is helpful, but writing a novel, for me, was way harder. There’s so much more material to work with.

Q: You talked about people’s experiences, realities, and histories—what would you say is the role of identity in this novel, especially given today’s politics?

A: It was important for me to explore the messiness and nuances that come with the narrator’s desire to find a sense of self. Ultimately, I don’t think she figures everything out.

She is Chinese-American, the child of immigrants, and her family history has very much affected who she is, once she starts questioning more--Why am I the way I am? What parts of my past and my ancestral post affected my sense of place in the world?

This book takes place in 2012-13, in the recent past. It’s important to capture how questions for people of color and women of color were important prior to Trump’s election. In the current political moment, questions around identity do have a lot of value.

For her, she doesn’t have a sense of power as she maneuvers through the world. She’s gaining an understanding of what could have led her to be the way she is, and what outside forces affect not only how she’s perceived but how she perceives herself. Exploring these questions gives her a sense, not of power, but at least of greater autonomy.

The exploration she’s doing in the book is important for everyone, but especially for marginalized, typically underrepresented people in this country.

A: A short story collection. I’m going through older stories and writing a couple of new ones. It’s similar to the novel in that the stories look at Asian and Asian-American characters who live day-to-day lives but contend with loss, whether a concrete loss or harder to define losses. It’s supposed to come out at the end of 2021.