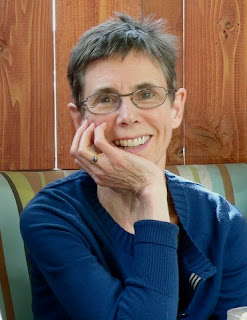 Mari Coates is the author of the new novel The Pelton Papers. She was a senior editor at the University of California Press, and her work has appeared in HLLQ and Eclipse. She lives in San Francisco.

A: I was interested in Agnes Pelton because I grew up with some of her paintings—the more conservative, realistic ones. My grandparents were friends of hers, and she was a presence in our house with the portraits they commissioned of their family and a couple of lovely landscapes.

Years later, after I moved to San Francisco, I learned that Agnes had also painted abstracts. A retrospective exhibit, the first major curated study of her art, was taking place just across the bay.

When I saw those pictures—spiritual expressions, which are brilliantly colored, astoundingly complex, and luminous—I was stunned. They were so different from the work I knew! I was enthralled and wanted to know everything about her.

Once I started reading the exhibition catalog—Agnes Pelton: Poet of Nature, a succinct and masterful rendering of her life and work by curator Michael Zakian—I was amazed at who she was and how difficult it must have been for her to make a life in art.

I was very moved, awestruck actually, at her persistence in spite of a difficult family history, her delicate health, crippling shyness, and constant worries about money. 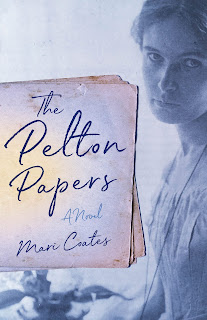 A: A lot, and yes! Once I had read the catalogue, I had a great starting point: the Beecher-Tilton scandal of the 1870s. The charismatic preacher Henry Ward Beecher had seduced Agnes’s grandmother, Elizabeth Tilton, which led to a lawsuit and then a long, much publicized trial.

Family trauma does not end with the deaths of the participants, and in Agnes’s case, the Beecher-Tilton scandal cast an enormous shadow over her life and career.

Agnes has stated in writing that she never read the transcript of the trial in which her grandmother, out of embarrassment, recanted her confession that she had had an affair with Beecher. Beecher was exonerated and the Tiltons were ruined.

knew that my family’s connection to Elizabeth, Agnes’s mother Florence, and Agnes herself was via membership in a religious sect called the Plymouth Brethren.

I was tremendously moved to read about Elizabeth, a shy, deeply religious woman who had been excommunicated from Beecher’s church and welcomed by the Brethren.

Growing up hearing about (but not being part of) the Brethren, I thought of them as cold and dogmatic and exclusionary, which I suppose some of them are. But at least one of the groups welcomed Elizabeth and gave her a spiritual home.

My grandparents were part of that group, and their friendship with Elizabeth, Florence, and Agnes continued until Agnes’s death.

Q: What did you see as the right blend between the actual history and your own fictional creations?

A: There is so much to Agnes’s story. Her life is a kind of template for the progress of modernism in America, and I was very interested in following that. But there were so many people who were important to her that I had to narrow the factual focus and keep the crowd down to a minimum.

I tried to stay very true to the facts of Agnes’s life as I was learning them. Agnes herself arrived as a clear voice early on, and I didn’t dare read her actual words and letters and journals until I had established the fictional voice.

Then I thought, if I’ve got it wrong, I will change her name and continue as purely fictional. But when I did read her papers (available through the Smithsonian Archive of American Art) I saw that I had it right, that it was seamless. Which made me feel that Agnes herself was having her say.

A: I hope readers find in the novel a place of serenity and calm, from which they can venture to make whatever art they would like. Painting, or writing, or dancing, or just enjoying the solitude of a spring day.

I hope they admire, as I do, the uncommon fortitude of this woman who had every reason to fall victim to discouragement but who instead created a glorious and colorful world of visions for us to enter and be refreshed by.

A: I became very enamored and admiring of Agnes’s mother Florence, and so I am setting out to tell her story. She was the oldest of the Tilton children, and it was she who told her father, Theodore Tilton (a man given to wild mood swings and occasional violence), that she had seen Beecher and her mother together.

She was a young woman at the time of the trial and was sent to Europe to continue her music studies where she met and married Agnes’s father, William Pelton. He was also an American expat, like her own father moody and often ill, and who overdosed on morphine when Agnes was 10.

So, I am very interested in Florence, who met life squarely and courageously, supported her mother and her daughter by teaching music, and who truly set Agnes on her artistic path.

A: Let me just add that while the book is fiction, it is as emotionally true as I could make it.

Some will be offended by the choices I made, suggesting that Agnes Pelton had romantic attachments to women. But the source of this is factual and came from Agnes’s own words. For me it was a deep desire that she should know love.

But to be clear, there is nothing in the historical record to substantiate the suggestion that she was gay or straight.