Michael McAuliffe is the author of the new novel No Truth Left to Tell. He is an attorney, and has worked at the U.S. Department of Justice and as state attorney for Palm Beach County. He lives in Florida and Massachusetts.

Q: How did you come up with the idea for No Truth Left to Tell, and for your character Adrien Rush?

A: My first job in the law was as a federal civil rights prosecutor at the Department of Justice in Washington, D.C.

As attorneys in the Criminal Section of the Civil Rights Division at Justice, we were responsible for investigating and prosecuting matters involving hate crimes, police misconduct, and involuntary servitude (now more commonly known as human trafficking).

While at the Justice Department, I did prosecute a large case against the Ku Klux Klan in Louisiana, and those experiences informed the novel.

While my work as a federal prosecutor–– including spending time with survivors of hate-based violence––motivated me to write about the Klan, it took almost 30 years to accomplish the goal. Hopefully, the book is an example of better late than never.

I struggled with the novel’s early drafts because of my actual experiences with fighting the Klan. I wanted to write a novel, not a memoir, and I was too concerned with fidelity to the facts as I remembered them to write anything that approached compelling fiction. 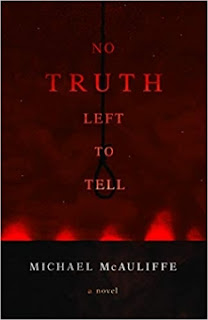 I eventually allowed myself the freedom to create the novel’s world and its characters. That’s when the story emerged, much like a gardener who realizes that spring’s wildflowers outside the tended box are as, or more, beautiful than what’s inside.

Adrien Rush is the result of imagining an ambitious, well-meaning lawyer who wants to help save the world and be universally recognized for it. Both goals are exaggerated, but real for many people––including myself.

Rush is complicated. He’s humbled by events. He grows through the novel. He starts out as an everyman type, but he keeps trying to distinguish himself by doing good.

Along the way, his motivation moves from seeking the approval of others to something deeper and more meaningful. There’s a high cost that accompanies his personal growth, and much of that cost is borne by others.

Q: The novel takes place in Louisiana--how important is setting to you in your writing?

A: Lynwood, Louisiana is an important character in the story. The town, however imperfect and at times embarrassingly lethargic in its habits, is home to the Klansmen and the victims of the Klan’s hateful acts. They all claim the town, or a piece of it, for themselves.

As a result, Lynwood is more than a place, it’s a reflection of both the good and the bad instincts of the people in the novel.

I wanted the story to pay close attention to the complicated nature of the Deep South with its cultural norms and diverse inhabitants. Lynwood’s changing, but change often proves to be a long struggle and not a clear pivot. For me, Lynwood exists even though the town is fictional.

A: I knew the novel’s basic conflict is between the violent white extremists and the majority of the community, but I didn’t know when I started how the criminal case would end. That is, I knew how the trial ended, but not the overall effort to hold the Klan leader accountable for the hurt and violence he inflicts.

I also made changes to the fates of certain characters as I became better acquainted with their world. However, I always knew that Nettie Wynn would play a central role in the story, and that she would guide, in some manner, the story to its conclusion.

I had the last sentence of the novel tucked away in the early drafts, just waiting for the right way to use it.

A: One of the novel’s messages is that we all struggle is to find our places in the world. Some do it with open minds and hearts. Others struggle and grow resentful and small in the process. Most of us fall somewhere in between. Where we ultimately land is important and is the novel’s story.

I also found comfort in the message that special expertise or knowledge can’t address a moral issue––basic goodness and generosity are what’s needed.

A: I am writing a follow-up novel in which Adrien Rush, the protagonist in No Truth Left To Tell, must battle a vast, secretive cabal of human traffickers.

Rush finds himself overmatched by the violence and sophistication of the traffickers. The victims suffer in silence as they are moved around and abused beneath the veneer of gentility in small town America. Rush has to grow up and get tough to save them.

A: One of my personal insights as a debut novelist (and aspiring repeat performer) is that there is a special joy in sharing written stories. The connections made between authors and readers are real and can help bind us together in ways that verbal exchanges do not, and cannot, match.

Maybe it’s because, with written word, one can go back with as much particularity as one needs to relive or reimagine the moment. I am in awe of the force of emotion that accompanies reading a story on a page and holding the words tight, at least for a time.