Robert Desiderio is the author of the new novel The Occurrence. An actor and screenwriter, he lives in Los Angeles and New York City.

Q: How did you come up with the idea for The Occurrence?

A: After 9/11 I began to wonder what would need to happen for the war on terror to end? I wanted to put forth a scenario that in a small way might open a door to an answer.

The answer I heard was…what if the current leader of ISIS had a mystical experience that created a crisis of conscience that led to him realizing his violent jihad was misguided. And what if he realized that he was called to shift the course of that violence, even if it meant sacrificing his life?

His answer was to surrender to the FBI. A radical act of love that made him a traitor to some, a hero to others, and the need for him to be a liar to those in power. From there the story tumbled out. 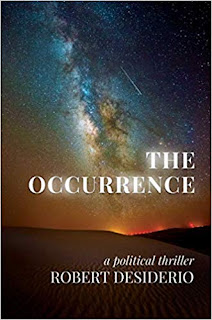 A: I did do plenty of research—reading books on bin Laden and others.

Studying the work of Jessica Stern, a Harvard scholar and U.S. expert on terrorism. Specifically her book Terror in the Name of God: Why Religious Militants Kill. And also the work of renowned journalist Janine Di Giovanni, specifically her book Dispatches from Syria: The Morning They Came for Us. And the life and death of Marie Colvin.

I also enlisted the support of a sensitivity reader. A young, Muslim, female journalist and author, Ava Homa. She guided me to the nuances of Muslim life, and appreciated that I presented her faith in an, ultimately, positive light.

What I learned, or was reminded of, is that we are all one. And no religious belief system is exempt from darkness.

A: I did not know how the novel would end. While working on this, my first novel, I discovered there are two types of writer: plotters and pantsers. Plotters plot. Pantsers fly by the seat of their pants, not the most poetic description of that approach but there it is.

I fall into the latter category. So, I had no idea how the story would evolve.

The “North Star” for me (as in all my work) is we are more than we know, and as one of the characters says, “We are One.” I don’t recall what changes were made along the way, but they weren’t huge. It was more that the characters’ internal struggles shifted and evolved, and led me to where they needed to be and go.

Q: As a screenwriter and actor, and now a novelist, how have the various disciplines coexisted for you?

A: For me, writing is writing. However, there is a distinction. Scripts are a blueprint for a house. Complex. Poetic. Multilayered. But a blueprint nonetheless. Novels are all that, and they are the house.

While each require a team effort. Scripts: Director. Actors. Scenic and wardrobe designers, etc., to interpret the story, a novel requires a pair of eyes other than your own to help edit, publish, etc. But, ultimately, a novelist is the only source of story and how it’s told.

The one aspect of “interpretation” in a novel is when the reader holds the story in their hands. What they see and feel in the “house" that’s been built is theirs alone. It may be shared by others, but is and will always be unique to them.

A: During this new life we’re all in right now of COVID19, I realized I missed the characters from my book, and wondered what their lives were like a few months after the end of the novel. And, so I have begun The Occurrence Part II. What will happen? I have no idea. That’s scary and thrilling.

A: I love to watch and play tennis. It’s a three-dimension chess game, and as I like to say, it’s boxing without the body blows. It keeps me fit, while I spend the majority of life writing.