Beth Morrey is the author of the new novel The Love Story of Missy Carmichael. She lives in London.

Q: How did you come up with the idea for the novel and for your character Missy?

A: The idea came from all sorts of different things. In my previous job I was a TV producer, and we made a show called 100 Year Old Drivers. Some of the people we cast were amazing, including a 105-year-old woman who drove herself to yoga classes every day.

That got me thinking about how “old age” has changed, with people staying alert and active much later in life. I was intrigued by the mechanism of using a dog to bring friends to someone who was lonely – a way of pulling in all walks of life – then heard about the fish-stunning at my local park, which seemed like a really quirky way to open a novel.

The character of Missy was in part inspired by Barbara Covett in Notes on a Scandal – she’s such a wonderfully waspish, cantankerous narrator, and I was interested in creating a figure like her, but one who could be redeemed by kindness. All the threads came together over time.

Q: The Kirkus Review of the book says “Pain, grief, and hurt are all part of life in this moving portrayal of the many forms love can take.” What do you think of that description?

A: I’m delighted by it! That review highlights something I was really trying to achieve with the book. 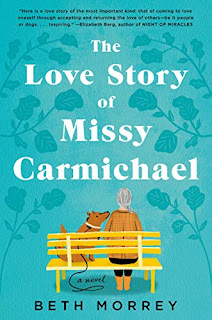 It’s described as “up-lit,” which is often associated with cosiness and happy endings, but for me, up-lit also implies a “down.” To quote Anne of Green Gables, you have to “willingly accept the sorrow of life with its joy.” And without that sorrow, the story wouldn’t be as interesting.

A: I knew two crucial things that would happen at the end, but the rest evolved over time.

I started writing before I’d worked everything out, because I find that intriguing and organic things happen that way. Sometimes your characters tell you where they’re going, which can make for a richer story.

Every now and then I would stall a little as I worked something out, and would go on a long dog walk to untangle the plot.

Q: What do you think the book says about ageing?

A: I’m a bit uptight about my own ageing. I don’t like it, and would happily make a pact with the devil to live forever. So I look to other stories of ageing to give me hope for the future.

I once read about a man who gave up smoking aged 95 – such a hopeful and uplifting feat, to have that kind of optimism! Grannies on roller coasters, octogenarians swimming in the sea, 100-year-old brides – I love it. It says “I’m not done yet.”

We’re living longer lives, with people active well into their 80s and beyond. There’s no reason to think anyone should ever stop learning and growing, or that it’s ever too late to make that leap, take the plunge.

So I felt it was important for my protagonist to be elderly, and, despite her situation, to retain a tiny shred of optimism, of curiosity. That’s how we keep going.

A: I’m writing Book 2, which is about self-improvement, making your life better and broadening your horizons, told through the perspective of a struggling single mum. I’m finding it really hard, because I wrote the first book on my own whereas now my circumstances have changed!

Separately, I’ve been recording a podcast series where I interview women about giving birth. It’s quite frank but hopefully funny, and gives me something to think about other than writing.

A: My own dog appears in Saving Missy, in a brief cameo appearance. She’s a labradoodle, so watch out for her…