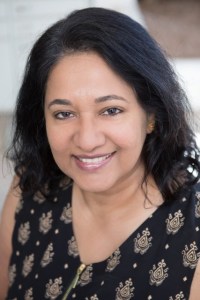 Srianthi Perera is the author of the new novel A Maiden's Prayer. A journalist, she has worked in Sri Lanka, Oman, Canada, and the United States.

Q: How did you come up with the idea for A Maiden's Prayer, and for your cast of characters?

A: Years ago, I attended a fiction writing program where I was asked to write about something I know and bring it to class. Since I grew up in Sri Lanka, it wasn’t difficult to find an experience that would be foreign to most Americans. I created my character Tamara de Silva and, during the progression of the class, followed her coming of age.

In class, when I read aloud each portion of my tale, I found that the other participants were very attentive and interested in my material. Also, the instructor was most encouraging,  and posted the first chapter in an online magazine he was editing.

That was the beginning of it. After the class concluded, I developed the story further and made Tamara narrate her uncle’s story and made it much more than her adolescent experiences. I wove in subplots that necessitated creating various characters, drawing and symbolizing from the vast resources of my culture and country. 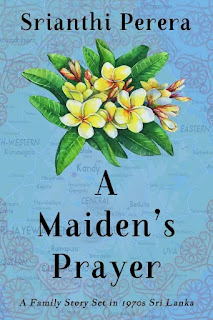 Q: The novel is set in Sri Lanka in the 1970s--did you need to do much research to write the book, and how important is setting to you in your writing?

A: I grew up there in the 1970s, hence that time period, from 1973-77 isn’t strange to me. I wish I had taken notes at the time, but of course, I didn’t. Therefore, I had to pore over archived newspapers to remind myself of various little details, and to validate the political events and social happenings that I portray.

Although this is a work of fiction, the story is rooted in reality. I wanted the setting and description to be accurate and immediate. I don’t use too much literary license, probably because of my background in journalism. In fiction, setting helps create nostalgia and maintains a story’s sincerity.

A: Even when I was halfway into the story, I didn’t know how the book would end because I had two probable endings and I tussled with them for a long time. I felt the ending I chose is more poignant than the other option I had considered.

A: In a nutshell, an entertaining and educational experience. To Americans, my story is an intimate glimpse into a little-known foreign culture. It is suitable for readers of literary fiction who are curious about other ethnicities, while history lovers would appreciate the accurate representation, along with the political backdrop.

Many themes run through the story, such as Vedic astrology, which played a salient part in the society; the underpinnings of Buddhism; the lingering influence of British colonialism; the sad and detrimental effects of alcoholism on a family; and the unique customs and social norms of the day. Sri Lankans would be nostalgic, while other Asians would be reminded of their own similar cultures.

A: From fiction to creative nonfiction: I’m working on a book of short stories based on my extensive travels and experience of living in four countries: Sri Lanka, the Sultanate of Oman, Canada, and the U.S.

A: The rituals and norms of 1970s Sri Lanka have changed. Puberty rituals are not followed, especially in the cities. Love marriages are more common than arranged marriages, and there’s less reliance on astrology for a successful life. In that sense, A Maiden’s Prayer is a time capsule.