Pamela N. Harris is the author of the new young adult novel When You Look Like Us. A former school counselor, she lives in Williamsburg, Virginia.

Q: What inspired you to write When You Look Like Us, and how did you come up with your character Jayson?

A: When You Look Like Us was an idea that stemmed from a wonderful editor at Alloy but was originally titled something else. When I came on board as the author, I felt that my voice was heard and constructing the story was a completely collaborative process.

I had a say so in everything, from the characters to certain plot points, and especially the setting. The team at Alloy gave me creative freedom to decide how the characters would get from Point A to Point B and so forth.

Jayson was a combination of a lot of different important people in my life—from family members to certain students that I worked with as a school counselor. Writing him was my way of honoring these special guys. 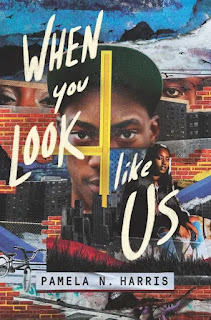 A: This story absolutely took so many twists and turns—and certainly had several potential endings! The only thing that I officially knew is that I wanted Jay to be a changed person by the end of the novel, but I grappled with whether it would be for better or for worse.

Without giving too much away, I will say that I always think it’s important to see real, hard-hitting issues that Black individuals face at both a personal and systemic level—but it’s just as important to see Black joy. I hope this story balances that to some degree.

Q: The Kirkus review of the book calls it "A powerful story about misperceptions, reality, and the lives lived in between." What do you think of that description?

A: I think I’m still in awe that Kirkus thinks so highly of my book! But seriously, I think this description perfectly captures what I set out to do with this story. While on the surface it’s a mystery about a young man searching for his sister, there’s definitely more between the pages—pun intended!

I often call this story a modern-day noir, but the obstacles are going to be different when the lead is a Black kid from public housing.

A: Coming up with the book’s title was definitely a process! The book had a different title that was based off its original setting, but once it became apparent that these characters belonged in my hometown, the original title didn’t make sense anymore (though I loved it).

My editors and I wanted to come up with something that was authentic to the characters, the tone, and the world, so we went with a second title to send it on submission—Fade (a word and theme that is used often in the novel). Yet, something was still missing.

After acquiring it, my editor at Quill Tree Books/HarperCollins, Andrew Eliopulos, also felt like the title needed something else before announcing the deal. Something in the vein of I’m Not Your Perfect Mexican Daughter by Erika L. Sanchez.

I combed through the manuscript to find the perfect line that could be adapted to a title, but then Andrew sent back the current title as an option and it was like the lights cut on in my head.

It made perfect sense—especially because I had just finished watching the beautiful miniseries When They See Us, by Ava DuVernay. The book’s current title captured the larger theme of the book—the misperceptions we have about certain individuals and how these misperceptions can impact them.

A: I can’t say too much, but I’m drawn to writing about social justice issues without being preachy. I’m working on a YA now that deals with a topic that a lot of Black people face, but it’s interesting navigating how a teenager might handle it.

A: I’m just amazed with how diverse and culturally responsive the YA world has become! I wish I had the likes of Tiffany D. Jackson, Nic Stone, Leah Johnson, and Jason Reynolds amongst others when I was growing up. It would be an honor to have my work sitting on the same shelves as theirs.