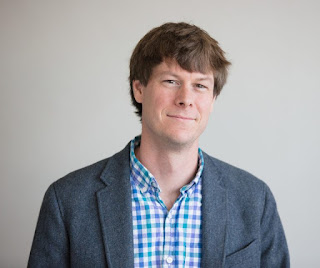 Jon Sealy is the author of the new novel The Merciful. His other books include So You Want to Be a Novelist. He is the publisher of Haywire Books, and he's based in Virginia.

Q: How did you come up with the idea for The Merciful?

A: Like the narrator, I had an old friend involved in a hit and run. I'd been out of touch with him for a while, but it was still a shock to log onto Facebook and see the news, and then to see what people were saying about him.

It was a tragic situation, but the public narrative around him didn't match the guy I'd known, and that stuck with me.

In my 30s I was growing conscious of the way doors close on you as you get older, and of the divergent paths people go down, and how "truth" can be a casualty of narrative.

Q: The Kirkus Review of the book says, "Sealy’s clever approach is reminiscent of the parable of blind men describing an elephant, as each character brings not only his or her own perspective but also adds crucial details to the chronology of events." What do you think of that description, and how did you choose the book's structure? 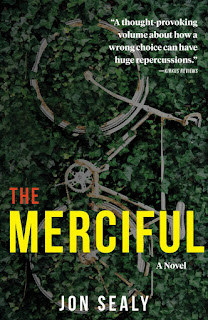 A: That all sounds right. Because a crime was my instigating event, I chose a trial for the structure because it gave me a natural way to move through time with a beginning, middle and ending, which gave me some freedom to bounce around among different perspectives.

If I had a motto for fiction writing, it might be "a story is a lie." By its nature, a story frames an event and thereby creates a narrative. But, for any given narrative, a creative person can come up with another narrative diametrically opposed, yet equally compelling, to the first.

I wanted this book to give a peek behind the curtain, and essentially, all the narratives in this book are in the narrator's head. He's making everything up, and you as the reader get to see how that happens, how invention works for a storyteller, and how no single narrative can encompass the whole truth.

A: The title is a reference to the Beatitudes: "Blessed are the merciful, for they will be shown mercy." Since none of us has access to the complete truth of any given situation, I think we could all stand to be more merciful, and show a little more grace in our dealings with others.

I'm also interested in the relationship between mercy and justice. Can you show mercy while still ensuring justice?

A: I don't write with the expectation that readers will take anything away from a story other than enjoying the book.

I hope some readers will be able to extrapolate and see that our subjective realities are based on unreliable narratives, that reality is filtered by your peers, the news, social media, and the like.

Truly understanding this concept--that your reality is an unreliable narrative, and that capital-T Truth is much more complex than most of us can ever understand--should shake you to the core, especially given that there is nothing you can really do about it except continue to go about your life.

A: Right before everything shut down in March, I finished a first draft of a new novel, but I'm not sure what to do with it given the kind of year 2020 turned out to be.

A: I also just published a memoir and craft book called So You Want to Be a Novelist, which I think is a nice companion to The Merciful because it's a nonfiction analysis of the relationship between art and life and how fiction works. Learn more at jonsealy.com or find me on Twitter @jonsealy.