David P. Madden is the author of the new book The Constitution and American Racism: Setting a Course for Lasting Injustice. A retired trial lawyer, he lives in Dayton, Ohio.

Q: You write, "This book is meant to inform and persuade Americans that Madison's Constitution is dead, and veneration will not improve its workings in the face of politicians who do not care about the rule of law." Were there specific events that brought you to this point of view, or had you thought that for a long time?

A: Many things, but the final years of the Obama administration when good governance was obstructed by a Republican Senate, where a minority of white Americans blocked the general welfare of all Americans at every turn despite the election of a president who had a national mandate.

The 2016 presidential election that propelled a man to the presidency who had no agenda but his own advancement and who exploited racism and white separatism to build a base that applauded his destruction of presidential norms and democratic aspirations.

A widening economic gap made possible by government by and for monied interests.

The origins of the Constitution was a pact with the devil and it made Trump possible. Madison created a national government that recognized and enforced slavery.

The government has no separation of powers when the presidency and Senate are controlled by men and women who place partisan power before the general welfare. Election of the president by the Electoral College is worthy of a slave republic, not a modern democratic society.

Madison argued in the Federalist that a republican government should be elected by a majority of its citizens, not some faction marked by money and power.

Abolition was purchased by 750,000 lives, not some grand legislative compromise made possible by the Constitution; despite this sacrifice after the Civil War racism and segregation still survive and are the rule of law. 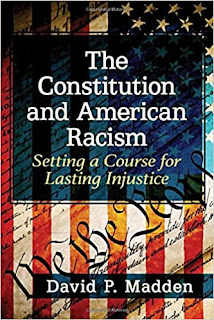 Q: What do you see as the most important flaws in the Constitution?

A: There is no separation of powers worthy of the expression. The recent impeachment and the defiance by Trump, Cabinet officers, and Trump supporters of congressional oversight authority demonstrate that if a party is willing to rally around its base interests simply to maintain its power, it can work much mischief.

The Electoral College is no check on bad or corrupt candidates. It is an opportunity to elect minority presidents. It is an institution that simply does not square with democratic government and the ideal of one person, one vote.

The grand constitutional compromise that resulted in an unrepresentative Senate has meant government by a powerful minority faction that when well-financed and managed can grab power and thwart the general welfare.

In 1861 it was true that South Carolina was too large for an asylum and too small for a republic. All of the states, regardless of size, must compromise for good government and under the current system have no incentive to work for the general welfare in this Senate.

The federal courts appointed by a president and confirmed by the Senate can be stacked against the rule of law when the president and Senate are controlled by a minority party that has racist and non-democratic agendas.

Q: What would you like to see replace the Constitution, and what do you see looking ahead?

A: Given the cultural divides and the influence of right-wing religion, a new constitution is probably impossible.

However, if such a document were possible it should include a guarantee of basic human rights and a blueprint for effective government. It should use popular proportional representation as the basis for the selection of all legislators, and there should be no super house that can thwart all governance by filibuster, one vote or some intricate parliamentary mechanism that rewards extremism with power.

Separation of power is possible by granting each branch judicially enforceable investigatory powers, like subpoenas and contempt.

More likely than a new constitution is amendment of the present Constitution, including a voting rights act; an equal rights amendment; judicial reform limiting terms; changing the selection process; elimination of the Electoral College; prohibiting gerrymandering, and limiting the power of the unitary presidency.

A: I hope readers are able to put racism and the Constitution in a historical, working perspective that does not venerate the Constitution. Racism is the persistent sin of American culture, economics and governance that will cause only conflict in an unequal society.

I would hope that readers would recognize that Madison saw money and faction as the seeds of the destruction of his republic.

For the past four years we have had a racist, corrupt government elected by a minority of Americans. Donald Trump sought dictatorship through the Constitution, and because the Republican Party has used racism (characterized as states’ rights) to hold onto Southern votes, he almost succeeded.

A more intelligent, a more able Trump might have pulled it off and certainly it can and will happen again with the politics of race being the basis for the next Trump.

I hope that readers would realize that in this topsy-turvy political world the Republican Party is not the party of Lincoln. It is the party of faction based on racism and alternative truth. The Constitution is in need of amendment to guarantee effective, fair, government with a judicial system where all persons are created equal.

A: I am a voracious reader. I am interested in the current election cycle and looking for manageable ways to amend this government and make it responsive to all Americans.

A: As I write, the Reverend Warnock and Jon Ossoff have narrow leads in the Senate races in Georgia. Without their victory, Biden’s government will be blocked by racist Republicans. There is no bone left in the spine of any Republican; Lincoln’s party is long dead.

The price of liberty is vigilance, and in today’s fractured political environment good government is purchased by the participation of all citizens. Trump can and will happen again. The stink of racism and factionalism can only be eradicated by people working for social and economic equality.