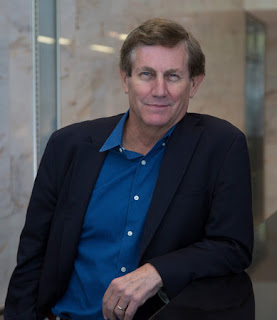 Chris Whipple is the author of the new book The Spymasters: How the CIA Directors Shape History and the Future. He also has written the book The Gatekeepers. A journalist and documentary filmmaker, he is the chief executive officer of CCWHIP Productions.

Q: You note that your new book began as a Showtime documentary. At what point did you decide to write the book?

A: A CIA friend of mine asked me why I do things backwards---making books out of films. The short answer is that when your day job is being a documentary filmmaker, you make films first. Both of my books, The Gatekeepers, about White House chiefs of staff, and The Spymasters, about CIA directors, were preceded by documentaries.

And in both cases, I thought the films barely scratched the surface of unbelievable, untold stories that cried out for book-length treatment. For The Spymasters: CIA in the Crosshairs---made with my partners, the great filmmakers Jules and Gedeon Naudet and Susan Zirinsky, now president of CBS News, I interviewed every living CIA director. And I quickly realized that the subject demanded a much deeper dive. 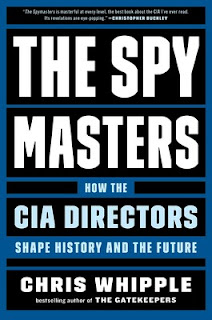 So when the film was finished in 2015, I went back to the CIA directors, their families, colleagues and archives. And I researched the lives of the men who came before them, beginning with the late, legendary Richard Helms.

Q: Of the various spy chiefs you write about, who would you say was the most accomplished? The least?

A: Despite numerous black marks---lying to Congress about the overthrow of Salvador Allende in Chile; his surveillance of domestic opponents for LBJ---Richard Helms, the quintessential old-school CIA director, was not afraid to tell Lyndon Johnson and Richard Nixon hard truths. He upheld the rule of law and arguably saved the agency by facing down Nixon over the Watergate coverup.

Conversely, Admiral Stansfield Turner and George Tenet will always be associated with massive intelligence failures---the fall of the Shah of Iran and WMDs, respectively. James Woolsey, Bill Clinton’s hapless first CIA director, couldn’t even get a one-on-one meeting with the president.

Q: What would you say are some of the most common perceptions and misperceptions about the CIA?

A: A common misapprehension, in the words or the late Senator Frank Church, is that the CIA has been “a rogue elephant,” careening around the world, toppling governments and inflicting mayhem without adult supervision.

The truth is that, over the last 70 years, the CIA has mostly got into trouble under direct orders from the president. And the agency is often called upon to rein in rogue presidents, as Helms did with Nixon, and an anonymous CIA whistleblower tried to do with Donald Trump.

Q: How would you describe the impact of the Trump administration on the intelligence community?

A: It was a broken marriage from Day One, when Trump visited CIA headquarters at Langley and delivered a tone-deaf tirade on the agency’s most hallowed ground, in front of the Memorial Wall. While barely mentioning the CIA officers who gave their lives to protect the country, Trump boasted about the size of his inaugural crowd. (This, of course, came after he compared the intelligence community to Nazi Germany.)

Trump has also succeeded in politicizing the community in ways that would make Richard Nixon blush, notably by installing a partisan sycophant, John Ratcliffe, as director of national intelligence (DNI). The first orders of business for Joe Biden’s new CIA director will be restoring morale, and ensuring that intelligence is de-politicized.

A: I have another book under way, and two documentaries in development. As for the subjects, you know the old saying: I could tell you, but…

A: More than anything else, I hope The Spymasters succeeds in humanizing the CIA directors.