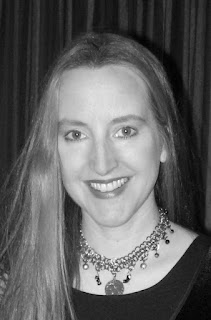 Alice Henderson is the author of the new novel A Solitude of Wolverines. Her other books include Shattered Roads. She is a wildlife sanctuary monitor, geographic information systems specialist, and bioacoustician.

Q: How did your own experiences as a wildlife sanctuary monitor influence your creation of your character Alex Carter?

A: It was while out in the field in Montana doing a species presence study that I first got the idea for the Alex Carter series.

I was on a wildlife sanctuary there, setting out remote cameras in the hopes of capturing images of elusive creatures such as wolves and wolverines.

I also set out bioacoustic recorders that record the soundscape of the sanctuary. By examining these recordings later, I can determine what species are using a particular piece of land, be they howling wolves, singing birds, croaking amphibians, or echolocating bats.

For years my wildlife work and writing had been separate, but out there on that sanctuary, I was suddenly inspired to bring the two worlds together. The idea came to me for a suspense series featuring a wildlife biologist who would encounter treacherous situations while studying endangered species in the field.

When I first got the idea for the series, I wanted each book's title to be the animal and its group name.

I chose wolverines for the first book because I really wanted to bring attention to their plight, as they have vanished from much of their territory in the lower 48 (less than 300 are left here now), and they have no federal protections.

But I quickly realized that wolverines have no group name. They are incredibly solitary. So I decided to make up a group name for them. Given their isolated nature, I decided upon A Solitude of Wolverines for the title. 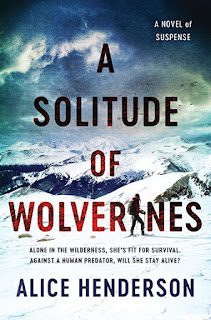 Q: The novel takes place at a wildlife sanctuary in Montana. How important is setting in your writing?

A: Setting is incredibly important to me. The species I choose determine the setting, just as choosing wolverines determined the book would have to be in the Rockies or the Cascades. The remote locations where wolverines live lends itself to an isolated, rugged setting that is excellent for suspense.

I always try to bring all the senses of each location into my fiction. How do the forests smell? What flowers bloom in the meadows? Does the temperature plummet when the sun sets? How do whitewater rivers sound as they roar over water-smoothed rocks in their path? I really strive to bring the locations to life.

A: I plot extensively before I start writing, so I knew how the book would end before I started it. I create a spreadsheet with all the scenes I need to tell the story. It's a great tool because I can easily look to the spreadsheet each day to see what needs to be written next.

But I don't outline so extensively that it takes all the energy and excitement out of the writing itself. There are still little surprises along the way and a sense of discovery as I join the characters on their journey.

Q: What particularly intrigues you about wolverines?

A: Wolverines are fascinating creatures that few people know about. When most people hear "wolverine," they think of Hugh Jackman in the X-Men, or perhaps the mascot of the University of Michigan.

But wolverines are amazing creatures who live in the high country of the Cascade and Rocky Mountains. They used to roam as far south as New Mexico and as far east as the Great Lakes region. They are the largest member of the weasel family, weighing in at an average of 35 pounds, and are important members of their ecosystems.

Unfortunately, a combination of climate change, overtrapping, habitat fragmentation and other threats have greatly reduced the wolverine population. As I mentioned earlier, in the lower 48, less than 300 are left, and instead of the wide range they once enjoyed here, they are relegated now to pockets in the Cascade and Rocky Mountains. They have no federal protections whatsoever.

With A Solitude of Wolverines, I wanted to not only write a suspenseful story, but bring awareness to the plight of these incredible animals.

Q: What are you working on now? Will there be more books about Alex?

A: Absolutely there will be more Alex Carter books. The second book in the series is written and off to my editor. In it, Alex ventures to the Canadian Arctic for a polar bear study. While there, she must fight for her life out in the ice, challenged both by weather and mysterious people bent on ending her study. It will be out in Fall 2021.

A: If readers are interested in helping wolverines, there are a variety of non-profit organizations such as the Center for Biological Diversity and the Natural Resources Defense Council that support wolverine protection legislation.

There are even a few like Conservation Northwest and Cascadia Wild that offer volunteer opportunities to get out in the field and track them in winter to learn more about their population.

In the back of A Solitude of Wolverines, there is a section on further information on these amazing creatures, as well as ways you can get involved.

To get my latest publishing updates, as well as wildlife news, green tips, and volunteer opportunities, please visit http://www.alicehenderson.com.