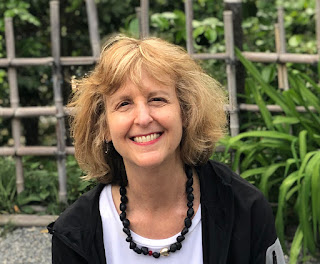 L. Bordetsky-Williams is the author of the new novel Forget Russia. She is a professor of literature at Ramapo College of New Jersey, and she lives in New York City.

Q: Forget Russia was inspired by your own family's experiences--at what point did you decide to write the novel, and did you know much about this history as you were growing up?

A: In 1980, at the height of the Cold War, and the Iran hostage crisis, I had the opportunity to study Russian language for a semester at the Pushkin Institute in Moscow.

This experience not only changed my life but it influenced the course of my life. I met many of the religious and dissident-type Jews of the Soviet Union.

Some of them were Refuseniks, people whose exit visas had been denied, and others said they could never leave because one of their parents had a “secret job,” which would prevent them from ever getting an exit visa.

Those Refuseniks had lost their jobs and were having a very difficult time just surviving. Many of those young Soviet Jews were the grandchildren of the Bolsheviks.

Their ancestors had believed in the ideals of the 1917 Revolution and had flourished until Stalin had them put to death or exiled to labor camps during the height of the purges of 1936-1938. They had inherited a legacy of terror and fear. I have never forgotten them and the time we spent together.

About a year before I went to the Soviet Union, I was having lunch at my grandmother’s apartment, and she told me her mother died on a boat in Russia. She was a woman who did not speak much, but when she did speak her words always contained great meaning.

I probed more into her story with my family and discovered from my uncle that my great-grandmother had been raped and murdered. This information simply stunned me. I didn’t understand why no one had ever told me this.

My grandmother had suffered from depression, and I then knew why. As an old woman, when she was ill, I once heard her cry for her mother and that absolutely broke my heart.

When I studied Russian language, she began to sing me songs of her girlhood—songs of unrequited love that made me feel she must be trying to tell me something about her own life experiences. 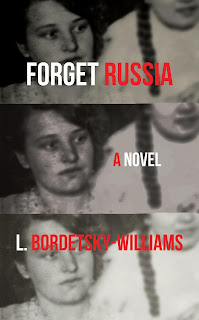 I wanted to grasp how such a horrific act of violence would affect the subsequent lives of women in a family. This is a very large question, but it was one of the questions that prompted me to write Forget Russia.

I also was aware that my grandparents, both Russian Jewish immigrants, had returned to the Soviet Union in 1931, during the height of the Depression.

My grandfather was a carpenter, who longed to return and build the revolution. He sold everything and borrowed money for the ship so his two small children, my mother and aunt, ages 5 and 3, and my grandmother could take an arduous journey back to Leningrad. They only stayed nine months. If they had stayed any longer, they would have lost their American citizenship and never could have gotten out.

On some level, my book looks at the nature of destiny—as I met these young Soviet Jews, I saw what my own life might have been if my ancestors had made other decisions. I began to see how interdependent our lives were despite our apparent differences.

I decided to write the book after I returned from the Soviet Union. So, you could see it’s been with me for a very long time!

Q: The novel covers most of the 20th century--what kind of research did you need to do on the various time periods and locations, and did you learn anything that especially surprised you?

A: I did a tremendous amount of research for the novel over a number of years. I read accounts of American Russian Jews, who, just like my grandparents, went to the Soviet Union in the 1930s.

They were heartbreaking accounts of Americans who couldn’t leave the Soviet Union once the purges reached a peak in 1936-38. Many were imprisoned and exiled to labor camps. Many did not survive.

I had the opportunity to interview a few American Jews from Russia who went to the Soviet Union with their parents in the 1930s and managed to return to this country.

I also read accounts of other Americans who went to the Soviet Union in hopes of getting work since there was very little work in America at the height of the Depression. I also researched a great deal about the Ukraine during the Civil War following the Russian Revolution.

In the beginning, it sounded like it could have been quite exciting for a young person to be there. There was even a baseball team set up!

However, that all changed drastically when Stalin’s purges swept the country in 1936-38. The dream turned into a nightmare. These stranded Americans got no support from the American government as well. They were truly alone.

I also discovered that the Ukraine was very unstable during the Civil War that occurred after the Revolution. Anti-Semitic Ukrainian nationalists controlled the Ukraine, and at other times the White army retained controlled, but once the Red army re-established rule, the retreating and defeated armies went into Jewish shtetls and massacred many Jews.

My poor grandmother was just a teenager when her mother was raped and murdered in one of these pogroms.

A: It seems that no one can actually forget Russia no matter how hard they try. My grandfather longed to go back and his wish was realized in 1931. While I believe he must have been disappointed with the harsh living conditions there, he never spoke about it.

My grandmother, with all of the tragedy she experienced there, occupied herself in her last years when she was physically fragile and blind by singing to herself the love songs she knew from her girlhood there.

Q: Why did you decide to write a novel rather than a family memoir?

A: I originally started the book as a memoir of my time in the Soviet Union. I wrote it and then put it away for many years.

Over time, as I returned to the manuscript, I felt the novel form would give me more freedom to write of the different generations and their experiences with Russia/the Soviet Union.

I knew the outline of the family history, but ultimately, I had to imagine, through my research, what life in the Ukraine and Leningrad was ultimately like for my characters. The fictional world has its own truths, and to get at the truth of what I wanted to express, I found I needed to fictionalize my actual lived experiences.

A: I’m in the process of planning a second novel. It’s germinating!

A: Given how terribly immigrants and refugees are being treated right now, it’s important to remember that America’s greatness depends on the varied experiences that immigrants bring to this country.

I’m really saddened to think that if my grandmother were to try and come into the country now to seek refuge from hate and violence, she would be turned away.