Jeff Porter is the author of the new memoir Planet Claire: Suite for Cello and Sad-Eyed Lovers. His other books include Oppenheimer Is Watching Me. He teaches English at the University of Iowa, and he lives in Iowa City.

Q: At what point did you know you'd write this book about your late wife?

A: Early on I knew I would have to turn my frenzy into writing or else—I kept talking to empty chairs, after all. Once the book took shape in my mind, about nine months later, I was free to play out my human madness like a fool on Shakespeare’s stage. I really did feel like I was on stage, partly because the narrative is addressed to Claire.

We’re all in need of stories of love, loss, and resilience, especially now, and it helps to know we’re all in this together. That’s kind of the book’s premise.

Oddly enough I wrote about death in my first memoir (Oppenheimer is Watching Me), a story about growing up during the Cold War, but it was more of a metaphor. Mutually assured destruction and all that dark stuff. The idea of death infiltrated our little psyches back then in weird ways, and that felt like an awful trespass. Duck and cover my ass—what that drill really meant was prepare to die.

With the new memoir, death isn’t a metaphor but a bewildering reality that reminds us all of our membership in this life. I think laughter might be the best answer to the riddle of death. Earning the right to laugh is not an easy trek, but that is the project of Planet Claire. 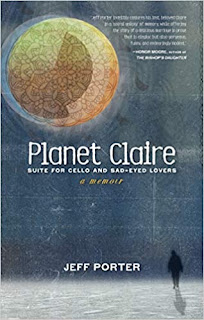 Q: How did writing this memoir affect you?

A: I’m guessing writing this memoir was a way of containing grief, and maybe making it a bit more intelligible. You know, there’s just no way of making sense of death—it’s just so catastrophic. But you have to try. Otherwise, maybe something dies a little bit inside.

I really felt at times that writing about Claire was a way of staying alive, a way of not disappearing. To grieve is not enough—you have to give it space to play itself out. Sometimes that means being turned inside out. It meant that for me. I was such a spectacle. Being a mess, at least I knew I was still alive.

But the book also tries to put Claire back in place. My wife died unexpectedly and there I was on the edge of nothing. To reimagine Claire and our life together was my effort to hold out against the nothing. That probably sounds a little dorky, but trust me there is such a thing. On a certain level, memoir is always that, a struggle against the nothing.

Claire was a marvelous woman. I don’t know if others knew that. In retelling the story of our life together, I wanted to put on view what she—so shy, so private—herself always concealed. I had to put her back in place.

A: Not long after her death, I dreamt of visiting Claire in a lovely park-like area that seemed slightly otherworldly. Immediately I could sense that something was different about this place. There was no death here. That’s what I said to myself, holy shit, there is no death here! Imagine being somewhere death wasn’t.

I sat on a large wooden bench and visited with Claire for a short while. We kissed and hugged. Claire looked much younger, in her mid-20s. She told me that here time didn’t exist. I said wow. Then she said welcome to planet Claire. When I awoke I knew that was the title of the book. Only afterwards did I discover the B-52 song.

A: I remember wondering why I wasn't angry (in a Job-like way) after losing my wife so abruptly. It concerned me that I didn’t feel any particular kind of rage. Was I falling down on the job? I drank a couple shots of whiskey and did my best to feel persecuted by an inscrutable universe. That didn’t work very well.

Instead, I just felt very grateful for having spent 27 years together with this remarkable woman. How could I not feel lucky? Anyway, these are thoughts and feelings evoked by writing about love and loss. Had I not done so, my poor little brain would have shut down.

For me, it was important to have a record of that first year, the year of deep sorrow, which is like no other in your life. Beyond the unrelieved agony of loss is the fact that you are looking at the world through different eyes. Suddenly you are an extremist and everything seems so bizarre and (dare I say) interesting.

I took long walks every day and just watched. Crazy birds, curious dear, babbling dogs, happy Ginkgo trees. My gosh everything is so alive out there. I found the irony restorative, but it had to be capture in writing for that to happen. Probably because I’m so thick-headed. Life is so much bigger and stranger than we think.

Anyway, three years later and you’re almost normal again. The agony recedes to the background. Frankly it’s a little disappointing. But I wanted readers to see my narrator as a kind of everyman who loses his mind but refuses to give up. Opening one’s heart to extreme sadness is a way to plumb our humanity. Sorrow is a place where we find ourselves as human beings—and for me that turned out to be a comic adventure.

A: I’m currently writing a story about a poor Sicilian family’s life in America.

It’s a tale of one particular immigrant family—the superstitious Baldo clan, led by wannabe mafioso Joe and his day-dreaming wife Maddalena and their seven feisty daughters—whose efforts to survive in a harsh environment during the post-Depression years tests the boundaries of endurance.

The family is colorful and spirited but faced with more challenges than they could ever have imagined, thanks in part to the prevalence of racism and violence.

The novel is narrated by Zeta, the eighth daughter of Maddalena, who died shortly after birth (neonatal death). Which is to say the story is told by a ghost.

Matters are also complicated by the family’s violent patriarch, a clever Sicilian with a mysterious past. Joe’s obsession with the mafia spells nothing but trouble for everyone. Things fall apart for the Baldos when Joe is sent to jail and Maddalena and her daughters are left to fend for themselves. What unfolds is an amusing story about class, race, and the absurdity of the American Dream.