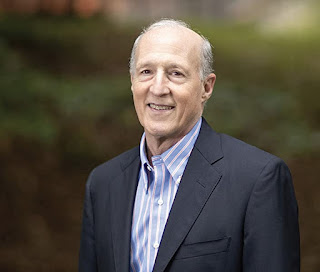 Mark E. Klein is the author of the new novel Franklin Rock. A physician, he is based in Washington, D.C.

Q: How did you come up with the idea for Franklin Rock?

A: Franklin Rock has been brewing for a number of years. In fact, I wrote a few of the early chapters—or facsimiles of them—about seven years ago.

I began with the concept of a character who could time travel and would be the vehicle for the important themes I wished to present in the book. I knew that I wanted to write what I often referred to as a “save the world” book. By that I mean I knew I wanted to write something that would have an impact on the reader, not just a good story but one that had the potential to alter the reader’s view of life.

I understand how it might sound presumptuous, but I have always felt a responsibility to help improve the world. I created a protagonist whose mission was to do just that. 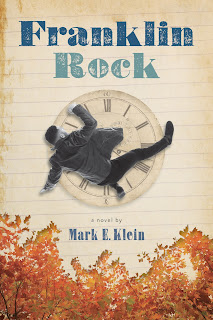 A: In a very real sense, I have been doing research on this book for over 20 years. Franklin Rock is my third book; the first two were nonfiction.

The first, What Do I Do Now: A Handbook for Life, is a self-help book. My second book, The Currency of Life: Uncovering the Clues to Why We’re Here, is more or less a philosophy book. Many of the themes in Franklin Rock come from those books.

I have also read numerous books on Einstein’s relativity theories and quantum physics and the consequences of those discoveries. While of course these are complicated topics, the implications of these theories, which are easily explained in lay terms, are absolutely fascinating.

I sprinkle these in during the discussions between the protagonist, Franklin Rock, and his mentor, Professor Niemeyer. I think readers will find these some of the most fun and interesting parts of the narrative.

A: Not only did I not know how the book would end when I began writing, I had little idea of where it would go after the first few chapters.

In nonfiction there is little wiggle room. You can’t—or at least you shouldn’t—make things up. Fiction is liberating. Writing fiction for me is the equivalent of painting yourself into the corner of a room and then merely drawing a door on the wall behind you and stepping out.

It’s hard to get stuck. If you’re clever enough, there is always a way out of any scene. I never worried about where Franklin Rock was going. I just decided, as Franklin does in the book, to let it come to me. Fortunately, it did.

A: I have been a physician for over 40 years. Medicine is an immensely rewarding profession. It is an honor to have patients seek your counsel and to have the opportunity to make a difference in multiple people’s lives every single day.

It was a natural progression for me to want to make an even greater impact. Franklin Rock seemed like the perfect vehicle.

Our news is filled with violence and fear. Occasionally a “feel-good” story makes its way onto our screens, but most of what we are fed is troubling and often depressing.

Franklin Rock is not some Pollyanna story. This book is chock full of truths about how our world really works. Franklin teaches us that there is every reason for us to live with great optimism and to welcome, not fear, the future.

People want hope, they want optimism, they want to be happy. Once you understand how the world works, you realize that all of these are not only achievable, they are always readily available if you know where to look.

A: I have already begun the sequel to Franklin Rock. Franklin will address many of the issues that confront us, both as individuals and together as a society. Some of the characters will undoubtedly return for an encore, and new ones will make their appearance.

I can promise readers more optimism, more fun, and no stress. No one will ever get shot in a Franklin Rock story!

Q: Anything else we should know

A: When I read novels, I like the book to move along. When I wrote Franklin Rock, I made sure that the story would flow and that each chapter could stand on its own. I am confident that it will be a fun, easy read.

I am also confident that when the reader has completed Franklin Rock, he or she will have gained something useful from Franklin and his friends and will have some interesting concepts to contemplate further, all with a bit more joy and hopefully a wide smile.

My hope is that if enough people read Franklin Rock, the needle will move, and our world will be just a bit better than it was.