Phil Stamper is the author of the new young adult novel The Gravity of Us. He works in publishing development in New York City, and he lives in Brooklyn.

Q: The Kirkus Review of The Gravity of Us begins, "Gay romance goes interstellar in this quirky coming-of-age tale." What do you think of that description?

A: At the end of the day, as long as Kirkus isn’t yelling at me I don’t care what they say.

I do think they found a nice catchy way to get people interested in the book. One big challenge I didn’t expect was that most readers initially assume the teens are in space, or that the teens are astronauts. I’ve seen Maya Rudolph’s gays in space gif about 40,000 times, and it always cracks me up.

But it’s helped me learn how to describe my book better…and how to be clearer about the fact it’s a contemporary YA, that the gays are not in space, that their parents are the astronauts, and so on.

Anyway, let me reiterate: The gays are on the ground. 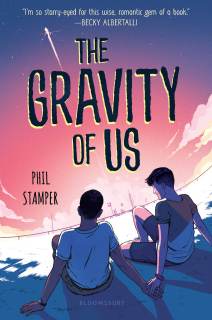 A: I plot out all my books using a beat sheet, similar to the Save the Cat method. Through that process, I plan out all the major plot points (and the ending!) before I get too far into the first draft. I wrote this for NaNoWriMo, so I really needed that structure to keep me focused, as writing 50,000 words in a few weeks is not an easy task.

That said, there were plenty of things that changed along the way. As I’m writing, I tend to go with my gut, and if I feel my writing pulling me toward another ending, I won’t stop it.

This one stayed pretty closely to the one I plotted out, but I’m sure there were small changes along the way. I really wanted a satisfying ending, so building up storylines and tension through my edits also helped give the ending the power I always wanted it to have.

A: One thing I love about the reviews I’ve read so far is that everyone gets something different out of the story. There are a lot of elements to this story—friendship, politics, first love, social media, family, mental health, finding your voice and more—which means there’s truly something for everyone.

That said, I drafted Gravity during the 2016 election in the U.S., and I knew so many people (especially queer teens) who just felt hopeless… and still do.

My hope is that my main character proves, even if you screw up from time to time, anyone can change the world. I want anyone who reads Gravity to take with them the fact they can make a change and, when they use their voice, people will listen.