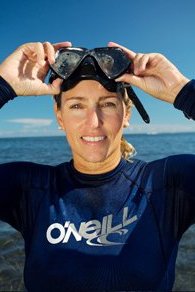 Ellen Prager is the author of Escape Galapagos, a new middle grade novel for kids. It's the first in a new series. Her other books include the Tristan Hunt and the Sea Guardians series. A marine scientist, she is the science advisor to Celebrity Cruises in the Galapagos Islands.


Q: How did you come up with the idea for Escape Galapagos, and for your character Ezzy?

A: I wanted to start a new adventure series for middle graders after my wonderful experience previously writing for this age.

And with my experience working in the Galapagos Islands, people are always asking me about the islands, the animals, etc. - including educators and students, so I figured it was the perfect setting for the first book in a new series.

Plus I love the Galapagos and there is so much natural wonder, beauty, and humor it makes it a special pleasure to write about and integrate into a fun story.

As for Ezzy, a surprising number of people come to the Galapagos yet are fearful of animals, particularly birds. So I used some of what I’ve seen with ordinary visitors to create the character.

And I wanted to illustrate that everyone has fears, insecurities, and challenges, and that sometimes situations demand we face them and it can help to grow and overcome such issues (especially with help from others).

One of my nieces (who shall not be named) had a bad bird experience as a young girl and when I brought her to the Galapagos the very first thing that happened was a mockingbird landing on her head on the zodiac going to an island. It was right after I told her that the birds don’t get too close. LOL!! She was a terrific sport, especially when the bird flew away and pooped on her backpack. 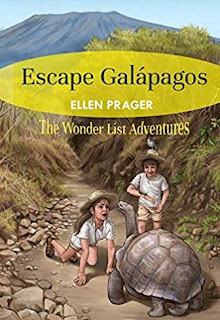 Q: You've spent a lot of time in the Galapagos--did you need to do any additional research to write this book?

A: No additional research on the Galapagos was required, but certainly some creative thinking to develop a good action-filled plot and characters. Along with Ezzy and Luke, I particularly like the elderly couple in the story, whom Ezzy calls Grandma and Grandpa Jones. Don’t want to say too much to avoid spoilers.

A: I had a general idea on how the story would end, but I tend to plot only a chapter or two ahead and let things evolve from there. And even then, a new twist or story line will develop as I write and then often I have to go back and change things earlier int the story.

But I love when suddenly I think of some very fun twist or a new part of the adventure, or even just a really good funny sentence!

A: My hope is that kids will take away numerous things from the story.

I want them to be amazed by and develop an interest in the true wonders of the Galapagos - the islands, the animals, the volcanoes, etc. I hope it will encourage a life-long interest in and stewardship of nature. And some subtle science learning as well.

On the character side of things, I hope they can relate to the insecurity Ezzy feels and sees how she grows, becomes more confident, and must rely on her younger brother. And that even if we are fearful, sometimes we can do things we never imagined.

I also want readers to see the importance of working together, friendship, and that just because someone is seemingly old they are not necessarily weak and or helpless.

Also how Ezzy’s father changes. In the beginning he shows his love awkwardly and isn’t very verbal about how he feels about his kids, but by the end he is much more able to express his feelings toward them.

Not everyone expresses love verbally, but that doesn’t mean they don’t feel it. But with kids, I think it is important to be able to show love and express it verbally.

Q: As you’ve noted, this is the first in a series--what are you working on now?

A: I am in the midst of writing the second book in the series - Escape “    “! Don’t want to spoil the surprise, but it takes place in a very different and at times colder location, but is also just as wondrous.

Ezzy, Luke and their father go to number two on their mother’s wonder list and of course, adventure and humor ensue.

In this book, one of the underlying themes is climate change and it is somewhere where it is happening faster than anywhere else on the planet. The book starts with a fun and exciting action sequence and there are some new characters and a few interesting twists.

A: I am also working on a web site where we will post photos from each location and readers can explore other potential wonder list locations.

Also, I love to hear from readers and have Skyped with classrooms using the book. The students have been fantastic and ask excellent and sometimes surprisingly advanced questions. So, I hope you’ll encourage your readers to not only get the book, but also to get in touch with me on Facebook, Twitter, or Instagram.