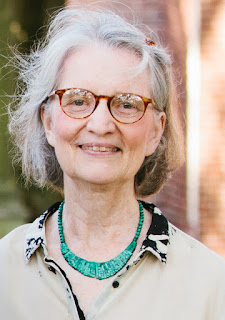 Amy Nathan is the co-author, with Sharon Langley, of the new children's picture book A Ride to Remember: A Civil Rights Story. Her other books include Round & Round Together. She lives in Westchester County, New York.

Q: You wrote a book for teens and adults, Round and Round Together, that focused on many of the same events described in A Ride to Remember. How did you and Sharon Langley end up collaborating on this children's picture book?

A: Both books tell the same story— about the protests that led to the desegregation of Baltimore’s Gwynn Oak Amusement Park in 1963, with the park’s first day without segregation happening on the same day as the March on Washington where Dr. King delivered his “I Have a Dream” speech.

Both books describe how on that historic day, Sharon was the first African American child to go on a ride at that amusement park, taking a spin on the carousel, which now is located on the National Mall in Washington, D.C., not far from where Dr. King gave his famous speech.

The first book, written for an older audience, tells the story in more detail and places it within the context of the wider civil rights movement.

As soon as I started work on the first book in 2008, I contacted Sharon Langley in Los Angeles, where she is an educator, to make sure it was OK with her for me to do a book on this story. Then I interviewed her about her role in the story by phone and by email several times over the next few years. 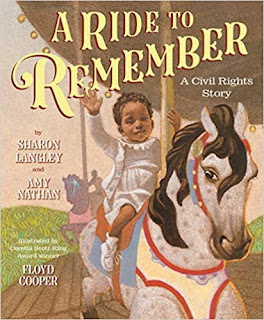 That first book, Round and Round Together, came out in 2011. In July 2013, a big celebration was held in Baltimore to mark the 50th anniversary of the end of segregation at that park and of Sharon’s historic ride. Sharon came to this celebration from Los Angeles.

We met in person for the first time and decided to find a way to together create a picture book to share this story with young children. We got right to work — and now that book is here!

Q: What kind of research did you need to do for this book and the earlier book, and what did you learn that especially surprised you?

A: For the earlier book, I read all the books I could find on Maryland civil rights history, read oral histories in the collections of the Maryland Historical Society and University of Baltimore, did photo research at the University of Maryland, did extensive research in back issues of newspapers from Baltimore and elsewhere, and tracked down as many people as I could find that were mentioned in those various resources as having participated in the protests at Gwynn Oak Amusement Park.

As for surprises: There were many! I grew up in Baltimore and was amazed to learn about courageous local civil rights heroes that I knew nothing about, ordinary people who did extraordinary things, devoting their lives to making the city a more just place.

What a shame that their stories had not been taught to me in school, nor had they been written about enough nationally that even though I was a history major in college, I hadn’t been aware them. 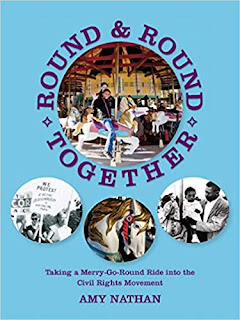 I decided to help more people learn about these remarkable people — including Sharon and her parents — with these two books. The research for the new book was based on that earlier research, plus Sharon’s memories and insights, and both of our memories of what had happened on new developments since 2011.

Q: What do you think Floyd Cooper's illustrations add to the book?

A: The framework for the picture book A Ride to Remember is Sharon’s parents explaining to her about segregation and their family’s role in helping to end it. She was only 11 months old when she took her historic carousel ride in August 1963. So she doesn’t have personal memories of it.

In this book, her parents try to explain to her at about age 6 what things were like for African Americans before her ride and before she was born and what was important about her ride. That’s a difficult conversation to have, and needs to be done with loving care.

There’s a tenderness in the soft colors and lack of hard edges in Floyd’s art that shows the parents’ loving care, and also gets across that this is a book about memories. Sharon said early on during our working together that she wanted the picture book to be about “feelings.” Floyd’s art helps emphasize that.

Q: What do you hope kids take away from Sharon Langley’s story?

A: That ordinary people—including young people—can join together and bring an end to terrible things that are unfair.

We also hope that by children becoming aware of the obvious unfairness of denying a child a ride on a carousel because of skin tone, that might carry over to other situations and help youngsters become sensitive to the unfairness of other ways people are discriminated against today.

A: In the readings we do with youngsters on the book, we want to encourage them to think about unfair situations that still exist today in their communities or in the wider world that they’d like to see changed—and what they as young people might do to learn more about what needs to be done and how they can help.