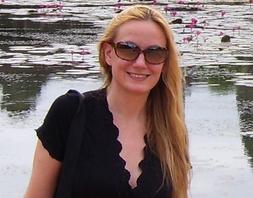 Carol LaHines is the author of the new novel Someday Everything Will All Make Sense. Her work has appeared in a variety of publications, including Hayden's Ferry Review and Denver Quarterly. She lives in New York City.

Q: How did you come up with the idea for Someday Everything Will All Make Sense, and for your character Luther?

A: I've always loved quirky, first-person protagonists. Hyper-intellectual, neurotic, frequently with some strange physical affliction. Luther was a character that came from a prior work. Though that work didn't end up going anywhere, it allowed me to develop Luther as a character.

In the prior work, he was a bachelor opera aficionado with very particular ideas. When I began this novel, I was in a period of mourning and experiencing a lot of the same types of things Luther goes through in the novel. Most of my work tends to the comic or the tragic comic. I was grappling with how to deal with such a heavy subject in a serious way but still with a lighter, wry touch.

I decided to use the Luther character as the narrator as he was a comic figure who would help me to maintain the tone I was going after as I mined my stages-of-grief material. The manner of Luther's mother's death -- choking while eating wonton soup -- was deliberately ridiculous. It thrust Luther into a situation where he was instantly in shock and grappling with a death that had arrived entirely unexpectedly. 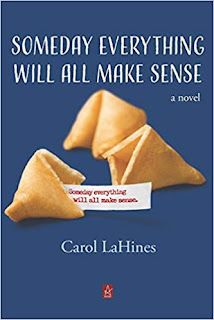 When I began writing the novel, I didn't have much beyond that setup. I did also know that I wanted Luther to me a music professor, because that would enable me to tap into my storehouse of musical knowledge. Luther's early music colleagues furnish a lot of comic relief and a counterpoint to the darker material.

A: I've always been better with voice than with plot. Shortly after beginning the first draft of the novel, I started panicking about the shape of the plot and how I would propel the narrative forward. When I set out, I didn't know that Luther would end up bringing a lawsuit against the take-out establishment that delivered his mother's final, fatal meal -- that just kind of happened during the writing.

Once I alighted on that plot point, I had a natural arc in the lawsuit and another, parallel arc in Luther traversing the stages of grief. I gave Luther a long-term girlfriend named Cecilia who happened to be a therapist and would help Luther as he navigated the stages of grief -- essentially, she functions as a voice of reason.

A third point I settled on fairly early on had to do with Luther's career at the university and his obsession with musical temperament. Basically, keyboard instruments used to sound at different frequencies than their modern descendants. Intervals like octaves and fifths reverberated in accordance with Pythagorean ratios (2:1, 3:2, etc.), as slightly tempered during the Renaissance.

I didn't know how the novel would end when I started; I just followed the trajectories of the stages of grief and the lawsuit and the plot line involving the early music symposium organized by Luther.

A: I did a lot of research for the novel, particularly on the topic of musical temperament.  I wasn't starting from scratch, since I had years of music theory during college. Traditional form & analysis courses start at the medieval period with Gregorian chant.

I remember the temperament problem being mentioned in passing by one of my professors, and it intrigued me. So it was something that I had filed away in my brain. I didn't explore the topic in depth, however, until I started writing the novel.

I hadn't realized that the problem of temperament was one that had preoccupied some of the greatest scientific minds throughout history -- people like Kepler and Vincenzo Galilei. The ratios described by Pythagoras were thought to govern planetary motion and to be inscribed in the universe -- whether and how to tinker with these relationships, and how to solve the problem of the wolfe tones, was a vexing one for centuries.

From around the Baroque period forward, the octave was artificially split into 12 equal steps and the modern equal temperament system was born.

Q: What do you hope people take away from the story?

A: I related very strongly to Luther as I wrote this book, and I hope that others relate to him as well. He grapples with universal questions we all ask: why are we here, what is our purpose, how do we go on in the face of loss, what happens after we die, etc.

A: At present, I am working on a first draft of something I would describe as Bleak House meets Infinite Jest.

I'm also in the final editing stages of another novel project. It involves a woman who is disenchanted with her life in suburbia who takes a position teaching the art of the memoir to prisoners. She ends up being drawn to one of the prisoners and things develop from there.

I won't reveal much more, but the work speaks to the ennui of long-term relationships as well as the adrenaline rush of the novel experience.