Kathy MacMillan and Manuela Bernardi are the authors of the new children's book She Spoke: 14 Women Who Raised Their Voices and Changed the World. MacMillan's other books include Nita's First Signs and Sword and Verse. She is a nationally certified American Sign Language interpreter, and she lives near Baltimore, Maryland. Bernardi is a film and TV writer who has written for shows on TV Globo, TBS, and others. She lives in Rio de Janeiro, Brazil.

Q: How did you come up with the idea for She Spoke, and how did you choose the women to include?

Kathy: This was the first time in my writing career where a publisher pitched a book to me instead of the other way around! David Miles, who was the publishing director at Familius Press at the time, had the idea of using the sound book format, usually only seen in books for very young children, to highlight the inspirational words of trailblazing women.

I had worked with Familius Press before, with Nita’s First Signs, and David knew my research background as a librarian would be a good fit for the book. When Familius presented me with the idea, I immediately knew that I wanted to work on this book and who I wanted my co-author to be!

Manuela: Kathy and I have been long-distance friends for more than a decade. We met writing Harry Potter fanfiction online - I was a Brazilian teenager in Rio de Janeiro who was trying to write in English for the first time, and she was an awesome librarian and American Sign Language interpreter near Baltimore, Maryland. We fell in immediate "writerly love" and began writing together and giving feedback on each other's stories and screenplays (as I became a screenwriter here in Brazil).

Kathy and I have always worked together with incredible sync, but this was the first time we got to write together officially for the world, and I was so excited. Especially about the subject matter. Speaking out as a woman is still something I struggle with every day, and having so much inspiration has made me much bolder.

Kathy: When I told Familius about Manuela and her screenwriting accomplishments, they quickly agreed to bring her on board. Then began the long process of research. We started by looking for appropriate audio clips, so the availability of the sound clips narrowed the field somewhat. Even so, there was a lot of back and forth before settled on the final list. 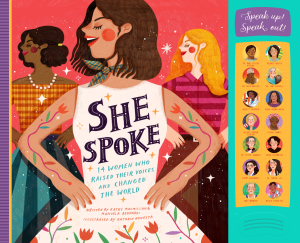 Manuela: It was so hard. Especially because we wanted to reflect the fact that there are so many inspiring women speaking out about so many important causes, and they are all so different - but the clips had to be in English. That narrowed the field even more.

That, and the availability factor, kept me from adding amazing Brazilian women such as Marielle Franco, Lota de Macedo Soares, Marta Silva or Maria da Penha. Even so, we were left with more wonderful women than could fit in the book.

Q: The book also includes the original voices of the women in the book. How did you select those excerpts?

Kathy: We had to find appropriate clips, in English, that were either public domain or that we could get permission to use. We found some wonderful historical clips that we would have loved to use, from figures like Mother Jones and Amelia Earhart, but some were so old that we couldn’t even identify who owned the rights to them, and some we were not able to get permission to use.

Manuela: And then came the problem of cutting such poignant full speeches into bit-sized clips that had to stand on their own and drive home their message. They had to be inspirational - but they also had to relate somehow to the “She Spoke” theme of the book: defending women's rights to speak, or a group's right to be heard, or these women's journey to be heard, or a cause that they were passionate enough to be outspoken about. 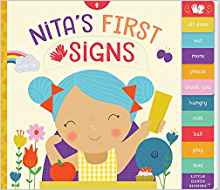 Q: How did the two of you collaborate on the project?

Manuela: Long distance! The two of us have been friends for such a long time, but we've actually only spent time together in person a few times over the years, when I was living in the U.S. while in my Writing for Screen and Television MFA program at the University of Southern California, and when I visited for the launch of Kathy’s debut YA novel, Sword and Verse.

So for the book, we used a lot of the same technologies we have always used to chat and give each other feedback: email, instant messages, and videochat.

Kathy: We also used shared documents, electronic databases, and international text messaging apps. It required a lot of planning and communication. Once we had identified the subjects for the profiles, we divided the research and drafting work, and then edited each profile together in a shared online document while discussing them via videochat.

When I read the book now, I can’t actually identify who wrote what, because so much collaboration went into it!

Manuela: I hope they can understand that speaking out about what you believe in is the most generous thing you can do for the people around you, especially the ones that, like yourself, might be afraid to express themselves. Especially, of course, women and girls, for historical reasons. 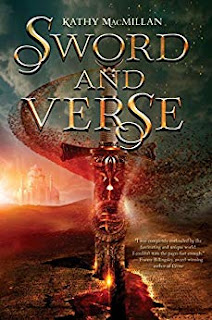 Speak out! Don’t be afraid of sharing your voice and your views. And listen to other women and girls when they speak. If we support each other, we can do so much more together. Anyone, no matter their gender, can learn to listen more so that everyone has a voice.

Kathy: I hope that hearing these powerful words right from the source will inspire readers not to give up, no matter what. Girls are often given the message that they must tone down their passions or that they will only be heard if they express themselves in soft, “polite” ways. But if girls and women - and allies of any gender - become aware of this and challenge those expectations, we can quite literally change the world.

One is a Brazilian feature titled Primetime Villain, about a woman who finds out that the villain of Brazil's most popular soap opera is based on her. It's going to be distributed by Fox/Disney and (hopefully) filmed this year. The other project is a TV show I created, which I still can't say much about, but I hope it's announced soon.

And of course, Kathy and I are hoping to collaborate on more books about inspiring women, either sequels to She Spoke or new concepts. We’ve already played around with lots of ideas.

Kathy: I am working on a middle grade fantasy series about centaurs, unicorns, pegasus, and kelpies, and preparing for the release of two more books from Familius Press: the newest board book in the Little Hands Signing series, Nita’s Day, in Fall 2019, followed by a picture book titled The Lady and the Laundry in January 2020. I’ve also got a YA fantasy novel I’m dying to get back to working on!

Kathy: We’re so excited for this book to be out in the world! So many wonderful books have been published in the last few years highlighting amazing women and their accomplishments, but we feel the audio clips really set this book apart. There is nothing like hearing the passionate words directly from the source.

Manuela: Women have been silenced for so long. It's powerful and poignant to hear their actual voices speaking out on important issues. The book is geared to ages 8-12, but I wholeheartedly recommend it to everyone. The audio clips make it accessible and fun for younger readers, and they add so much for teen and adult readers as well - of any gender.