Richard Michelson is the author of the new children's picture book The Language of Angels: A Story About the Reinvention of Hebrew. His many other books include Fascinating and More Money Than God. He is the owner of R. Michelson Galleries, hosts Northampton Poetry Radio, and was poet laureate of Northampton, Massachusetts, where he lives.

Q: Why did you decide to write a children's book about the reinvention of the Hebrew language?

A: Because it is an amazing story!!  No one had spoken Hebrew as a daily language since the time of the Maccabees—over 2,000 years ago. Imagine having to make up words for every new development in 2,000 years—ice cream, bicycles, libraries, etc.

And even the Jews living in Jerusalem when Eliezer Ben Yehuda arrived were totally against the idea. Hebrew had come to be viewed as a “holy language,” and folks were aghast at the fact that you would use Hebrew to ask where the bathroom was, or to tell someone to take out the garbage.

Even more outlandishly, Eliezer wanted his son, Ben-Zion, to be the first native Hebrew speaker since Biblical times, so he wouldn’t allow him to hear any language but Hebrew. 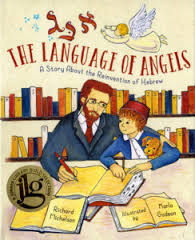 Which meant that Ben-Zion had no friends. He wasn’t even allowed to hear the sounds animals make. His father would cover his ears when dogs barked or cats meowed. Yet within Eliezer’s lifetime, he saw his dream come true. What a difference one person can make!

A: I knew nothing about the subject when I started – Ben-Yehuda to me was the name of a street in Israel -- so almost everything about the story was a surprise. But mostly I was amazed at the impact this one man had on an entire language. Ben-Yehuda lived to see 55 schools open with all instruction in Hebrew…

For research I relied heavily on Eliezer Ben-Yehuda’s grandson, a Florida-based rabbi also named Eliezer Ben-Yehuda, who also has a strong interest in the Hebrew language and who has written about both the language and his grandfather’s life. There were numerous other sources which I cite in my bibliography.

Q: What do you think the book says about the importance of words and of language? 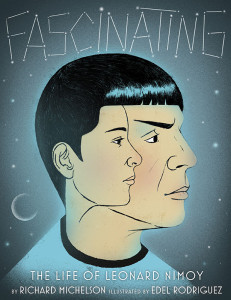 A: Most children think of language as “God-given,” or immutable, and why shouldn’t they? We teach them “the rules” in school, and grade them on their vocabulary, grammar, punctuation, and spelling. But languages are more like living, breathing, ever-changing organisms.

So although on one level the book is about “the reemergence of Hebrew,” it is mostly about my love of words in and of themselves, and how much fun it is to play with language. That is something I hope to share with all children and those of you who once were children yourselves.

Q: What do you think Karla Gudeon's illustrations add to the story?

A: I was thrilled to be able to work with my friend Karla on this book….I will admit that I do not speak Hebrew, and Karla does, so I relied on her greatly. 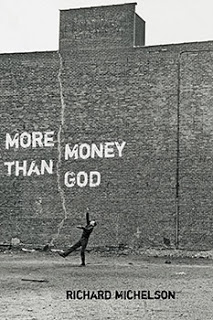 A: I always try to have a number of projects going: so am writing a follow-up to my 2015 adult poetry collection, More Money than God (University of Pittsburgh Press), plus I am working on an alternative Haggadah (with the artist Michel Kuch), and I am finishing the libretto for an opera on the life of Edvard Munch (with composer Steven Schoenberg), and I have a couple of new children’s books in progress.

A: You can visit me at www.RichardMichelson.com.