Lucy DeVries Duffy is the editor of Vignettes of Moiry, written by her late mother, Rebecca Goethe DeVries. It focuses on the French village where her mother grew up in the early 20th century. A longtime athlete and former teacher, Duffy lives in Brewster, Massachusetts.

Q: You write that you worked on this book for many years. Can you describe the process?

A: It’s probably more than 30 years, and also going back to my childhood. I grew up knowing these stories. My mother was very French, and had a love with my father but always longed for her country. She left at 19 and couldn’t really go back [for many years].

She longed to be published. She saw herself as a writer, and presented her stories to a French club. My father was a minister, and she presented them to people in the church.

I was widowed young, he died in 1986…In 1988 I lived in the village. I had a copy of the stories in French. There were still people who remembered the stories, the people, the time. That was fascinating.

I had fun experiences too—I was reading a vignette with one woman, a story about gypsies. The gypsy about whom [my mother] wrote—it was [this woman’s] husband who had been in love with the gypsy!

Another one was the story of Alphonse. She was writing that his foster parents were miserly, and I was reading the story with his grandson and he got angry.

I knew my mother’s voice, I’m very protective of that. They copy editor loved it and respected it. They’re simple tales that have simplicity and profundity… 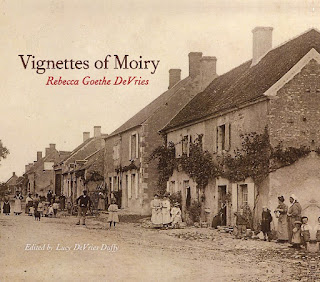 The designer did a marvelous job. She said we need a flower [to show throughout the book]. She said, fleur de lis. I said, no, she was not an aristocrat. The coquelicot is so typical of that region. I also had just the right pictures to go with that. My mother saved everything.

Q: So you said you had heard the stories as a child--did you discover anything new in the course of your work on the book?

A: In conjunction with this, I have all [my parents'] love letters. I learned a lot about their relationship and her development from being 16 years old to 19 years old. In reading the letters carefully, she was very young, and…I gained more intimate knowledge of my mother. I had the time.

A good part of my drive was not only love for my mother and feeling she should be published and her voice should be out there, it was a realization of how smart she was. She’d written many of these when she was very young.

She was an abandoned child. There was every reason for her to be crazy, but she had a sense of herself. Even when very young, she had the distance of a writer in observing the village. I always knew she was remarkable. I always knew she loved these stories.

But I had a greater sense of who my mother was, and why my father fell in love with her. He was an intellectual with a calling to be a minister. He was college-educated. She [was not].

Q: You mentioned the pictures. Can you say more about them?

A: Most of the pictures used in the book were in albums of my parents. Some of the postcards were my mother’s. Some I collected in my trips to Saint Parize/Moiry.

One photo, the one of the children watching the USO entertainer, I got at the National Archives in College Park, Maryland. The photo of the lavoir on page 15 and the photos on pages 104 and 105 were given to me by Bill Felton, an American soldier who’d been at the American Base Hospital Camp at Mar-sur-Allier. He and my mother corresponded after the war.

After my mother’s death I continued to correspond with Bill and he sent me photos and other things. The photo in the church on page 98 I took. The photo of bread on page 6 was taken by a friend.

Q: How did you work with the designer?

A: I did the sequencing of the stories. I met her once early on, and sent her photos that I thought would go. I had no idea of the design. She’s very talented.

A: I think it’s basically that they’ll know what life was like in a little village in central France at the beginning of the 20th century. Also, little moral tales about being the best you can be.

She also was very critical. She had a keen sense of the position of the church. Her foster mother was somewhat anti-clerical. There’s the basic historical stuff, and a sense of good writing…and I sense a moral tone of what is good and bad.

I almost think the book is a portrayal of Mme. Soupet [her foster mother]. When I was in the village in 1988, someone remembered her. She was a strong force in the village.

I did [the book] in French and English. My mother wrote them in French, and she translated most of them. A friend and I went through it, being very sure not to change her voice.

The book has absorbed about 30 years of my life; it’s been 30 years that I’ve been widowed. It’s not only a desire to give my mother a voice, but I was working through my own grief, and the closeness to my mother, a connection to her and her past, at that time of my life was soothing, and has continued to be.

The book, in French, I sent to the village. It’s a little village of 1,300. I got a letter from the mayor—they loved it and since I’ve sent it, the principal of the school has developed a curriculum based on three of the stories that lead up to the war. On the basis of that curriculum, they got a national prize…

I self-published both French and English editions through Blurb. Since it is printed on demand it is very expensive. I recently had the paperback book printed. It is in a couple local bookstores or available from me for $19.95 plus postage. I make no money on it. I just want it out there and my mother’s voice preserved.

I am taking bookmarks as gifts [for the village]. I took them last summer and they were much loved. It is a picture of my mother at age 16 and her words in writing about her life. It is in Moiry that I learned the philosophy of life. As well as being vignettes of life in a tiny village in the early part of the 20th, I think, in total, that is what Vignettes of Moiry is about.