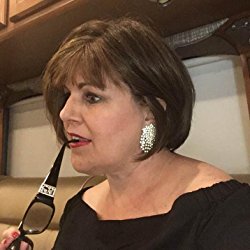 Kristen Fulton is the author of the new children's picture book Long May She Wave: The True Story of Caroline Pickersgill and Her Star-Spangled Creation.

Q: What kind of research did you do to write this book?

A: Research is something that I take seriously. For Long May She Wave, I spent two weeks in Baltimore and Washington, D.C., gathering my original research and then returned for another week to fact check.

First I had wanted to dispel myths that we were all raised knowing: Betsy Ross made our flag. I started in Philadelphia, the home of Betsy Ross, to discover that she was a fabulous seamstress, one of many in her town.

Unfortunately, the only account to support that she made our flag came from William Canby, her grandson, 33 years after Elizabeth (Betsy) Griscom Ross died. For years historians have searched records, letters, and diaries but nothing has substantiated that Betsy Ross had anything to do with making our flag.

My next stop was Ft. McHenry in Baltimore, Maryland, where the Star Spangled Banner waved, home of the rampart. The flag was made when our young country was preparing for the British, again.

It was the war of 1812. The Major in charge commissioned Pickersgill Flags and Ensigns to make two flags, one large enough for the British to see it from miles away. 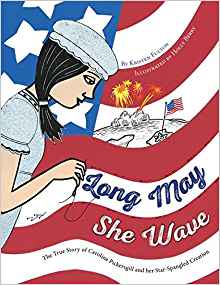 So, I went to what was the home of Mary Pickersgill, now the Flag House Museum. I spoke to the museum curators and historians. I visited the Baltimore Public Library and pulled U.S. Census records from the early 1800s.

I wanted to discover who all lived in the home; to verify that those receiving credit for making the flag lived in the house. As morbid as it may sound, I visited the gravesites to verify death dates as well.

Before leaving Baltimore, I took my research a little deeper. It is commonly believed that the flag was assembled in Claggett's Brewery. Before I wrote it as fact, I pulled the property records and deed. Claggett's Brewery opened four years after the bombs bursting in air, so this can't be factual.

The truth is, the flag was assembled in a warehouse owned by George Brown; he owned several malthouses.

Even for a picture book, just 40 pages, nonfiction authors take their research as a priority.

Q: What do you think Caroline Pickersgill’s story says to kids today?

A: It reminds each of us, not just children, that everything we do, whether it be solo or as a team, can affect history. Each of us are important and it may seem like we are “just doing what we are told to do.” But someday someone might write a book about us. It is literally a KIDS MAKE HISTORY book.

Q: What do you think Holly Berry’s illustrations add to the book?

A: Her vivid colors bring the bombs bursting in air to the forefront and her scrapbooking details add that feeling of being sewn together to emulate the construction of the flag.

It was the little nuances that she added that will bring a young child into the story, such as hiding a cat on several pages. We know that children are listening even when we think they aren’t paying attention. So, hopefully even a younger audience will start to learn the meaning behind the words to our National Anthem and the creation of the flag.

A: I usually have five books in motion that are still in my hands and they are at different stages. My five stages are Researching, Compiling, Organizing, Drafting, and Polishing.

Researching a story idea is mainly done via the internet; it is researching what is being said about a topic and will it or how will it appeal to kids. Once I move it from being researched it goes to my compile list and I start researching a new idea. My compiling is ordering and verifying all primary resources, visiting the location and talking to people.

My next step is organizing my research into an online, then rough draft, and of course polish the manuscript. But this is an addition to When Sparks Fly, A Royal Ride, Sacagawea, Flight For Freedom, Sarah’s Tea Party, and a new series that I have already sold and are slated to come out.

A: My husband and I travel in an RV a great deal of the year and visit bookstores, libraries, and schools. I am always happy to stop by and say hi if I am in your area. I try to keep my travel schedule update on my website but please feel free to contact me.

I will be in the D.C./Baltimore area throughout the middle of June with book signings at the Flag House Museum on Flag Day (Wednesday June 14 beginning at 10am for a day of festivities) and Hooray For Books in Alexandria, Virginia, on Saturday, June 17 at 3pm.

I am always happy to do Skype or FaceTime visits with classrooms and read to the class. Writing is my career, my fans are my life.