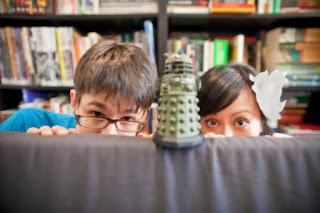 Q: How did you come up with the idea for the third book in your Sherlock Sam series?

A: The international school in book 3 is actually based on one of the very first schools in Singapore that we visited after we published our first book (in fact, most of the students are named after kids we met during that visit!). 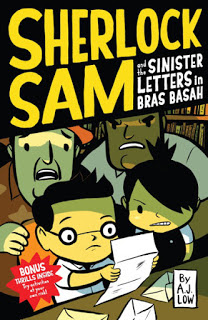 The idea for this book came about because Adan really wanted to write a story about how it feels to be far away from home, and how, at times, it can be difficult and lonely to be in a new and strange environment. We had met kids who had moved to Singapore from other countries and knew that many of that felt that way too.

We came up with the idea of "chain mail" because it was something that both Adan and Felicia played when they were kids (before email was invented :D).

Q: Do you feel your character Sherlock Sam changes from book to book at all?

A: When he first started out, Sherlock mainly spent most of his time with Watson, Wendy, and Jimmy. But now his team of detectives is growing and he's also gaining a reputation as a reputable kid detective (which is why Inspector Siva reached out to him) so he's learning to take on bigger, more difficult cases, and how to work with the different personalities in his team too. 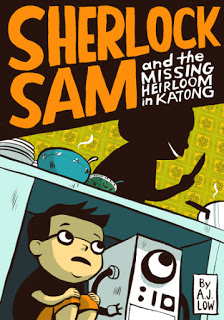 In later books, he encounters his most fiendish nemesis yet and gets in lots of trouble with his parents (which has never happened before).


Q: What age group do you think would especially enjoy these books?

A: Well, the books are meant for kids between 7 and 12, but we've inserted quite a few geek Easter eggs for parents and grown-ups as well so we think anyone who likes nerdy jokes and a fun mystery would enjoy our books!

Q: Who were some of your favorite authors when you were kids?

A: Felicia read a lot of Enid Blyton and Felicia and Adan both really loved the Nancy Drew and Hardy Boys series! 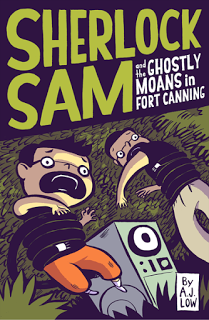 A: In Singapore, our 11th book was published in 2016 and right now we're putting the finishing touches on book 11A--it's somewhat of a continuation of book 11, but not really. That should be out next month.

It's titled Sherlock Sam's Orange Shorts and is the first collection of short stories that we've written for the series. All the characters will be alternate reality versions of themselves! For example, Sherlock Sam's superhero alter ego is named Chicken Wing, Watson is a Star Ship captain, and Wendy has the power of colour-fu!

We're really excited about it and we hope our readers will enjoy the new take on Sherlock, Watson, and the Supper Club!

A: Just that Sherlock Sam has multiple pairs of the exact same orange shorts that he wears in every book. Even we don't know how many he has exactly :).