Julie Iromuanya is the author of the novel Mr. and Mrs. Doctor. Her work has appeared in a variety of publications, including Tampa Review, Passage North, and the Kenyon Review. She teaches in the University of Arizona creative writing MFA program.

Q: How did you come up with the idea for this novel, and for your characters Job and Ifi?

A: When I was growing up, I rarely saw stories about African immigrants set in America; yet this was my story. As Toni Morrison says, if the book doesn’t exist, then you must write it.

Job came to me as I began to mine my own stories. In his earliest form he was essentially a composite of different kinds of bachelor friends my family has known over the years.

I drew up a ridiculous character sketch about a man who is simultaneously attracted to and repulsed by everything America has to offer. In the middle of all of this confusion is an aristocratic family back home that has invested every one of their hopes and dreams in his success in America.

In many ways, Ifi serves as Job’s counterpart—or better still, his counterpoint. Like him, she becomes heavily invested in keeping up appearances. But because of her poverty and circumstances, marriage is her path to upward mobility, and her aunt and uncle have paved that path. 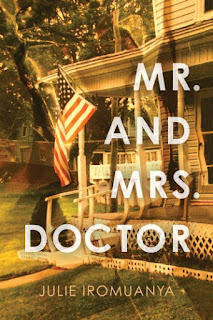 As a result, she feels a sense of duty like Job does. But also, importantly, Job is initially the face of her American Dream. By the end, both Ifi and Job must come to terms with what they want of America.

Q: Your story deals with Nigerian immigrants in the United States. Do you think it's unique to that particular immigrant group, or is it more universal?

A: Maybe it’s both. Stories can be universal in their particularity. Many of Job and Ifi’s experiences are unique and familiar to other Nigerian immigrants.

At the same time, the immigrant experience is such a central aspect of the American ethos that I imagine their experiences will be familiar to others as well.

I hope that readers recognize in each of the characters something familiar to grasp: fellow Nigerians, Emeka and Gladys, who might be more appropriately viewed as “sojourners” or “expats” willing to endure humiliating sacrifices if only to advance economically; Mrs. Janik, the bigoted neighbor and descendent of Eastern European immigrants, who fastens to a supremacist idealized vision of immigrants as “good, hardworking stock”; Cheryl, the descendent of a white, middle of America, working class family, who is driven to criminality by both entitlement and desperation; and Jamal, the African American teenager whose blackness pitted against Job’s complicates our understanding of race in America.

A: I just had a conversation with my mother about the title. We both laughed because I almost changed it! But my agent loved it and everyone else has loved it. It’s a good thing I listened to them! For me, the title—which was really just a working title—is a way to symbolize the costumes that Job and Ifi put on.

A: Oddly enough, I did know the ending. I had the ending written long before I had the story fully fleshed out. Still, I tried on other endings over several revisions, but I didn’t feel that any of them really reflected the depths of Ifi and Job’s truth without falling into some sort of moralizing gesture.

A: I’m working on another novel that focuses a bit more on the children of immigrants this time around. I’m a little superstitious about works in progress, so that’s all I’ll say.

A: Thanks for the opportunity to chat!