Deepa Iyer is the author of the new book We Too Sing America: South Asian, Arab, Muslim, and Sikh Immigrants Shape Our Multiracial Future. She is a senior fellow at the Center for Social Inclusion, and was executive director of South Asian Americans Leading Together. She lives in Silver Spring, Maryland.

A: I decided to write the book for a couple of reasons—one, that I had been working in the environment of post-9/11 America for a decade and a half, working with organizations and people affected by the backlash after 9/11.

Q: Your title refers to the Langston Hughes poem “I, Too”. Why did you choose this title, and what does it signify for you?

A: It’s such an evocative poem for so many people, especially people of color. When Langston Hughes wrote it, it referred to black people who were marginalized in our country.

For the people I’m writing about, there has also been a sense of feeling “other” and marginalized. At the same time, there’s a feeling of being connected to what our sense of America is…

The Langston Hughes poem is very uplifting at the end, that black people [are] part of the reshaping of America. 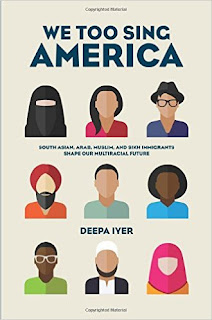 Q: You write that “after 9/11, the state became both a champion for defending the civil rights of South Asians, Arabs, and Muslims and the enforcer of harmful policies that led to the surveillance and detentions of thousands of immigrants from these communities.” How do you see that dual situation having come to pass, and what do you see as its impact?

A: I don’t know that this is necessarily unique to the communities I write about…but definitely after 9/11, we saw components of the federal government wanting outreach to our communities: If your children are being bullied, if you’re a victim of hate violence…Oftentimes the same federal agencies [engaged in] surveillance of our communities.

When you have that dichotomy, it does not do much to build trust. When do we trust the state, and when do we not? People are often anxious and reluctant to report even civil rights violations—they might be caught up in a web of monitoring.

Secondly, if you don’t know whether you can trust the government, it’s difficult to build a partnership to fight terrorism. There’s a tremendous amount of distrust.

Q: Do you see a way to repair this distrust?

A: One way is to stop surveilling our communities, monitoring and targeting us, detaining and deporting us. When the state plays a heavy-handed [role] without probable cause, without making a case for why…Thousands of people were deported after 9/11…

When they stop and we actually have a government focused on valuing and protecting the lives of all people [that would help,] but that does not seem to be the way we’re headed in.

Q: You note in the book that the groups you write about constitute a diverse set of populations. Do you see these groups coming together more in future?

A: I do. At least within the Muslim/Arab/South Asian communities, we have definitely come together, particularly since 9/11--we feel under attack. There is coalition-building in our communities.

That is the hope—when we hear political rhetoric that’s divisive and xenophobic, I try to focus on the strength of our communities. We’ve built organizations we didn’t have before 9/11. We’re also able to disrupt many misleading media narratives. We have sharp media spokespeople.

The plan is to continue to build our political process, and…to ally with other communities of color.

Q: You’ve mentioned the current political rhetoric around these issues. What do you see looking ahead given the current situation?

A: One thing that’s important to note is this didn’t happen overnight. When I traveled on a book tour in November and December, at the height of the Muslim xenophobia, people would say, I’m so shocked at the level of rhetoric we’re hearing.

But this has been a 15-year cycle. This has been building since 9/11. The difference is that it’s mainstreamed because it’s part of the election cycle. It’s going to continue to ramp up; I don’t see xenophobia and Islamophobia being tamped down…

What all of us have to do who find that harmful is step up and speak up. Demand that elected officials not engage in this political rhetoric.

When people are running for office and talk about their policies—Mr. Trump [talking about how] Muslims should be banned, or hold special identification—all of us need to be asking analytical questions to assess why these policies are even talked about.

Third, to demand that candidates are accountable to us. I think we can disrupt and reshape the political cycle, but it will take a lot of people…

A: No, I’m at heart an activist. I enjoy writing, but more, connecting with people of all backgrounds on how we can shape our neighborhoods, our schools…that’s what really excites me.

I don’t know if I’ll ever write another book, but I’m writing shorter articles. Now, I’m focused on how we build power, especially among communities of color and progressive white allies.

As the demographics are changing, there are opportunities to use the numbers to our advantage—we have to build together in more effective ways.

A: I am on a book tour, holding community conversations around the country. If people are interested, they could check out my website, or Facebook page, or Twitter. I’ll be in California, Texas, Nashville, and a few other places over the next month, and I want to connect!