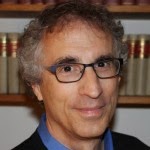 Steven Levingston is the author most recently of Little Demon in the City of Light: A True Story of Murder in Belle Epoque Paris, which is now available in paperback. He also has written the e-book The Kennedy Baby: The Loss That Transformed JFK. He is the nonfiction book editor of The Washington Post, and he previously worked for The Wall Street Journal and the International Herald Tribune, among other publications. He lives in Bethesda, Maryland.

Q: You write that you read about this case and immediately became intrigued by it. What first interested you about it, and why did you decide to write a book about it?

A: I stumbled on it through an academic article by an Oxford professor…I read it four or five times; it was really hard to understand. It was in academic language. It dawned on me that it would make a good popular history. I’m always looking for a good narrative.

[Also] there was the era and the color. I was bowled over by this particular time. I couldn’t believe people lived and thought like this. If [you could pick] any time to live, that would have been so fabulous! It’s all about spectacle…and a tremendous sense of doom. The two things are colliding with each other. It’s a rich environment to situate a story.

And the story itself was pretty wild. It grew out of those times. This kind of case could never have existed except at this time, [involving] hypnotism and a crime staged as a theatrical event.

Q: Your book includes so many details about the main characters, the murder, and the legal case. How did you research the book, and what surprised you most in the course of your research?

A: It was a lot of research! My wife helped me a lot. She knows French better, and is a terrific researcher. It was looking at newspapers—the detail newspapers provided was remarkable, more so than today. They were all over the story [including such details as] the clothes she [defendant Gabrielle Bompard] wore…

Also the police documents were incredibly detailed. They were all handwritten. Then there are a lot of good secondary sources created since then on the Belle Epoque…

It just went from one surprise to the next. I can’t believe that people think this way. It was so exciting and so crazy. [People] would come to Paris at this time—it was a place to have a good time—from Germany, from England. They had complete freedom to go nuts. 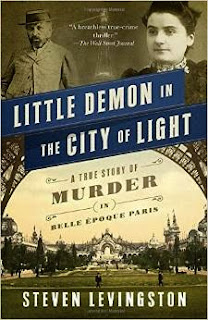 Q: Hypnotism plays a big role in the case. Did you know a lot about hypnotism before working on this book?

A: Not really. It was a bit of a challenge. But there’s a lot of good material, especially from the era…

Q: This trial was huge at the time, right? People were aware of it all over the world?

A: Pretty much. People crowded outside the place. It took place in December—it was absolutely freezing and there were blocks of ice on the Seine. Clocks froze on buildings. But people still came out. There were touristy, commercial aspects around it—men were selling little trunks [resembling the trunk the body was in] with chocolate inside. It was a circus.

Q: Is there a present-day trial you could compare this to?

A: Gabrielle Bompard, the woman at the center of the case, was almost a precursor to the celebrity crimes we get these days—from O.J. Simpson to the latest ones, Amanda Knox and others. She was a prototype for that kind of behavior. O.J. may not have wanted the attention he got, but Gabrielle wanted the attention and she played it to the hilt.

Q: What is the legacy of this case today?

A: The irony to it is that it was the first time somebody tried to use a hypnotism defense in a murder case, and it was not entirely successful. She got a limited sentence for other reasons, because of her mental state…

Q: Moving away from your book for a minute, as the Post's nonfiction book editor, how do you see the book review industry changing in recent years, and what do you see happening in future?

A: I don’t know that there’s been so much change in book reviewing; we’re still reviewing books. There is pressure in the media world to attract more readers and viewers to the website. We’re trying to build up more readership for the book reviews; we don’t lead the website in traffic!

But there are times when a review centers on a contemporary issue and will attract [attention]—but book reviews by nature are more sedate and thoughtful. They clash with the current trends in media progress.

A: There will continue to be pressure, but for the Post things will stay pretty much the same. We try to choose the best books [to review]—books that have important contemporary appeal. But we don’t want to do only those. We have to survey the entire culture to do book reviews properly.

There are certain subjects where there are an excess of books out, like war. [Lately there are many on] Waterloo. We have to be very discretionary and thoughtful about which ones to choose… 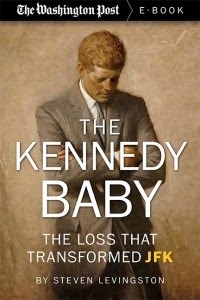 A: Yes. [I wrote an] e-book on the Kennedy baby [Patrick Kennedy]—I did it around the anniversary of the assassination because I wanted to test the e-book market. The story was just a straight narrative based on the documents of the time.

Patrick Kennedy lived for 39 hours [in 1963]. No one had zeroed in on that aspect [of the Kennedy presidency]. It was very emotional; it showed a different side of Jackie and John.

I’ve always been interested in the Kennedys….the new book is a look at the relationship between John F. Kennedy and Martin Luther King. It’s been chronicled in various ways, but I don’t think anyone’s zeroed in on the impact the two figures [had on each other]…

I do think there’s an important theme there—how power deals with protest…my belief is that [King] was instrumental in provoking a transformation in JFK that allowed him in June 1963 to have the moral courage to come out in favor of civil rights [and] make an amazing speech. There’s a wonderful trajectory of the story that tells something about two icons of the era.

Q: Anything else we should know about Little Demon in the City of Light?

A: One interesting aspect is…the agonized birth it went through. It didn’t come easily to life; it took eight years and a couple of iterations. [The first, more academic, version sold] and then the financial crisis came and the publisher was getting nervous and threw the book out. I got to keep the advance.

I had the opportunity to rethink the thing, and I didn’t feel comfortable with the main character, Gabrielle. I tried a different medium—I wrote a one-woman play about her. That helped clarify it. It’s a circuitous way to understand the story. [I decided to] rewrite it as a dramatic narrative, and was able to sell it again.