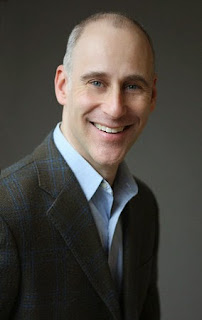 Marc Peyser is the co-author, with Timothy Dwyer, of the new book Hissing Cousins: The Untold Story of Eleanor Roosevelt and Alice Roosevelt Longworth. Peyser is a writer and former deputy editor at Newsweek, and also has worked for Budget Travel and All You magazine. His work has appeared in a variety of other publications, including The New York Times and Life.

Q: You write that you came up with the idea for this book from a children’s book about Alice Roosevelt Longworth. How did that come about?

A: We have two daughters who are now 10 and 12. When the older one started to look at books, my mother-in-law had gone to the bookstore at Sagamore Hill and saw a picture book, What To Do About Alice?, about Alice being a rambunctious young girl. I didn’t know anything about Alice Roosevelt Longworth.

I was an editor at Newsweek and I was editing a story about Eleanor Roosevelt and the conjoined house her mother-in-law bought. As I was working on the piece, I realized there were a lot of parallels with Alice—the year they were born, that they were close [growing up].

We went to look for a book on it, and discovered there was no book. Six years later, now there is a book on it!

A: We spent a lot of time at the presidential library at Hyde Park; at Harvard, where the [Theodore Roosevelt] stuff is; the Library of Congress has a collection of Alice’s writings.

There’s a lot written on the Roosevelts but since nobody looked at this particular connection, it was [only] a starting point. In their young years, there were lots of letters—they had two aunts who adored them, Aunt Bye and Aunt Corinne. There was a lot of back-and-forth about the girls.

As they got older, Alice became famous first, and then Eleanor—and their lives were chronicled in detail.

Q: What surprised you most as you researched the two cousins?

A: We knew early on how different they were as grownups. Alice was a dyed-in-the-wool isolationist, a Republican—anti-Eleanor things. It’s amazing how close they were as girls.

There’s a diary entry from Alice, where she [discusses who she would want with her] if she were marooned on a desert island, and Eleanor was first on the list! People think of the relationship as contentious, and it was in the public sense, but they were very close when they were younger. 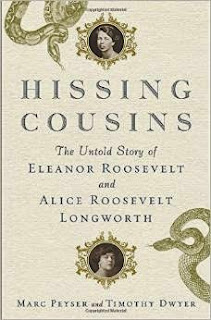 Q: In the book, you write, “It’s easy to forget that Alice’s and Eleanor’s larger ideas flowed from the same political headwater: Theodore Roosevelt.” How did he influence his daughter and his niece?

A: Alice adored her father, though she was clearly angry with him for having essentially given her to her aunt when her mother died. She was a very loyal daughter, [almost] obsessed with him after he died.

[Roosevelt] adored his niece. And Franklin adored [Theodore Roosevelt]—he copied many of his ideas. We forget how progressive [Theodore] was. [Franklin] wore the same eyeglasses, he went around yelling “Bully!” and he wanted six children.

A: I’m an old headline writer—I’m used to coming up with pithy titles. We had the title early on, though we didn’t broadcast the title because we didn’t want to give the impression that this was a mean-spirited book.

Q: How did the animosity between the two cousins come about?

A: They both came [under Theodore Roosevelt’s] influence, but realized if they were going to leave their mark on the world they would have to find a way to do it. Alice became the anti-Eleanor and Eleanor became the anti-Alice.

It must have been difficult for Alice growing up in a family of supreme do-gooders. Alice went in the opposite direction—she had a bad-girl image, and was reminded, “Why can’t you be more like your cousin Eleanor?”

Eleanor was bewildered by Alice’s life [and the idea of just having fun]. She wanted to do good, always. Alice [had a point] when she was making fun of her cousin—she wanted her to lighten up…

Q: What is the legacy today of the Roosevelts?

A: We’re seeing at this moment the playing out of the idea of a political dynasty. Poor Jeb Bush—he’s a very capable man; the biggest knock against him is that no one wants another Bush. Hillary Clinton will face the same thing.

The Roosevelts occupied and monopolized the national conversation [for decades in] the 20th century. We pride ourselves on being a democracy, but at the end of the day, we fall back on name [recognition].

Q: How did the two of you write the book? Did you each take on a part of it, or did you send your writing back and forth?

We’re married, we would talk about it at dinner every night, so there weren’t surprises—but there was a lot of back and forth. It was challenging…Fortunately for me, Tim is very good at taking editing. I’m horrible at taking editing….

Q: Will you write another book together?

A: I don’t know. We’re very proud of the book, but it’s a long process. We have two children, two careers. People don’t make enough on books any more to take a year off. We would love to, but [maybe] it’s not practical.

A: The most fascinating chapter to us, it was one of Tim’s chapters—was the chapter on the “Singing Teapot.” We think of Eleanor of being a saint, a do-gooder, and she [conducted political] dirty tricks, brilliantly.

The teapot was responsible for the defeat of Theodore Roosevelt Jr. in New York; it effectively ended her first cousin’s political career, and was a source of [animosity] between Alice and Eleanor going forward….Our thinking of Eleanor as a political saint was turned on its head.