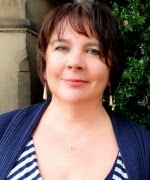 Andrea Gillies is the author of the new novel The Enlightenment of Nina Findlay. She also has written the novel The White Lie and the memoir Keeper. She lives in Edinburgh, Scotland.

Q: How did you come up with your main character, Nina, and why did you decide to involve her in a triangular dynamic with two brothers?

A: The origin of fictional characters in the head of writers is a genuine mystery. Who is Nina Findlay and where did she come from?

There must have been an encounter with a skinny Nordic girl with plaits, at some point in my life - or perhaps it was [Nina’s mother] Anna I met, or saw in a magazine, or stood behind in an airport queue, and subconsciously banked her in imagination for later. I have no conscious origin for either of the women.

But I suppose one of the things that interested me, when I decided I wanted to write about a midlife meltdown, was how people are often misled by beauty, and make assumptions about it.

I say at one point, about Anna, that people had always misinterpreted her blondness, her cornflower blue eyes, her easy-tanning skin, with summer and with lightness of spirit, and I was interested in how a tortured frustrated soul might lurk unseen behind those eyes.

I find it hard to separate Anna and Nina in my mind; to me they're very much a pair, the same and yet starkly different. I was interested in how Nina might feel she had inherited her mother's soul and temperament, despite evidence to the contrary, simply because they looked almost identical, and how she might wrestle with that.

Once I had Nina and Anna, I needed some dynamic in Nina's childhood that would divide them later: Nina's enlightenment is as much about her mother as about herself, after all.

It came to me that Anna was covertly unhappily married and flirtatious with other men (and boys!) as a way of shoring up her own esteem, and that Nina's enlightenment would be partly about seeing that in a new way.

A little bit of autobiography comes in at this point - in the 1970s in my Yorkshire village (a similar one to Nina's own) we lived in the big square starkly modern house with the nine paned vast window. It's my childhood home, so was easy to write about, and to feel, and to see.

The boys next door were imaginary (sadly!) but the triangle dynamic seemed an ideal way of Nina learning about herself - very belatedly - and learning that her mother's advice was toxically wrong in some ways - in its theoretical basis - but at the same time, essentially right.

I was attracted to that tangle. Tangled relationships are always interesting.  (I write about this character-invention process as if it were rational and conscious but in fact the characters and the scenario came to me quickly and in flashes like cinema, playing out in my head, as they always do when I'm about to write a book. It's more instinctive than planned). 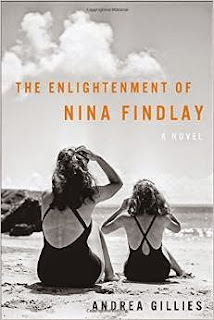 Q: Much of the book takes place on a Greek island. Why did you choose that as one of the novel’s important settings?

A: The island is based on the tiny island of Antiparos, in the Cyclades island group in Greece, where my ex-husband and I spent a happy, lazy month in 1987, two years before marrying.

The island in the book is based on my (probably very faulty) memories of the island, with added fictional elements - there was no modernist white hospital on the shore, for instance. The island of the novel superimposed itself on the island of memory.

I don't think there's a high top village on Antiparos, with a winding road leading up to it: that invented itself, spooling ink onto the map, because it was needed as the ideal place to make a big decision, and to look down on the perfect little world laid out below.

The more I think about it, the more obviously fictional this island becomes. I haven't been back, since 1987, although after my divorce I thought about returning.

But then I began to imagine how difficult it might be to be unhappy there. The rising panic Nina feels when she returns on her own, having just separated from Paolo, is exactly how I feared I would feel.

On a more prosaic level, I needed somewhere for Nina to run to, that was absolutely opposite to her home territory. Many of us fantasise about the ease and self-invention of a new life of simplicity in an old-fashioned society like the island.

I know from experience (although in my case, it was two years spent living in rural France) that the fantasy often fails to live up to the reality. 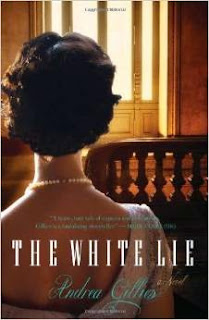 Q: The novel goes back and forth in time. Did you write the first draft in the form the book appears now, or did you write it more chronologically and move scenes around later?

A: What I do is begin to write the story, in the right order, and then scenes that belong elsewhere might suggest themselves, so I allow myself to be distracted from the forward progression, in order to write those.

Sometimes it's just notes that are needed on a later scene, that bear some relation to the part of the book I'm at, chronologically. Sometimes it's the whole fleshed out episode.

Often this works in a symbiotic way - I'll be writing about Luca in his recklessly flirtatious relationship with Nina, for instance, and my mind will travel to a later, darker scene, in which we see another sort of Luca altogether.

I write quickly and do a lot of drafts and edits. Once I get onto the second draft, it's pretty much all done in the right order, from front to back, because otherwise a complicated time-looping book like Nina Findlay would become unmanageable, in terms of its narrative threads and internal logic, and spinning plates would begin to fall off poles.

Q: Why did you choose a doctor-patient relationship through which to tell much of the story?

A: Dr. Christos arrived fully formed in the book, his face very clear in my head, and the complications in his own life (and heart) very clear, the moment I realised that Nina was going to have a near-fatal accident on her little Greek island.

That's how the book begins: with a car accident that might have been fatal, that (even though it wasn't fatal) might have been a disaster, but was the engine of Nina's re-ravelling herself, knitting herself back together from her earlier, desperately unravelled, state.

It had already seemed imperative that Nina encounter further romantic temptation on the island, and I needed a man to provide it.

Dr. Christos's face loomed up in my imagination, shortly after having this thought. There he was: an almost-handsome, almost-romantic, almost-honest, but ever-attentive confidant and advisor, who might complicate Nina's love triangle even further by appearing to offer another way out of her problem.

I also liked that he could be an authority figure, and assume expertise, that he could present himself as another male authority figure in her life, telling her who she was and what it all meant. Another patient at the island hospital wouldn't have presented the same metaphorical potential. 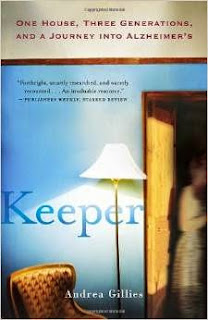 A: I've just finished writing the next novel, which is called Waiting in the Woods. It's about a 34-year-old Englishwoman called Isabella who realises that her husband is in love with their neighbour, and who goes to a retreat weekend at an abbey, a community of nuns, to think about the decision she needs to make.

There, in a clearing in the woods on a snowy winter's day, she meets a middle-aged nun, who seems to be a perfect person to confide in.

Isabella tells her, not only about her current marital crisis, but about four other crises she's had in her life. She takes the chance to confess to it all. The meeting proves life-changing for both of them.

The following summer, the nun appears in Isabella's small English village--Isabella is now pregnant--and Isabella's instinct tells her that she should be afraid. The nun says she needs to talk to her, but given opportunities to - and Isabella keeps giving them to her, wanting to know - she doesn't seem to come to the point.

The hinge of the narrative sees Margaret, the nun, revealing her purpose to Isabella, at which point a cat and mouse game ensues, a psychological drama that takes us from Somerset to London, to northern Scotland, to a hidden farm in Dorset, to the safety of family in Kent, and back to the abbey again.

When Isabella has a baby, the game changes. The stakes are higher. And it may no longer be possible to be sure about who the pursued is, and who the pursuer.

A: The next novel is about a woman artist in the mid-20th century. I'm just beginning to do some reading and thinking about it.