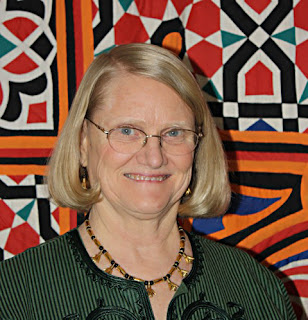 Karen Leggett Abouraya is the author of the children's picture book Malala Yousafzai: Warrior with Words. She also has written Hands Around the Library: Protecting Egypt's Treasured Books. She lives in the Washington, D.C., area.

Q: Why did you decide to focus on Malala Yousafzai in your new book?

A: Young people have a unique power to draw attention to significant issues. Malala is of course a perfect example and I reflected on it in a recent column for The Washington Post.

More and more books about strong women are finally being published, but Malala is special because she began demonstrating her strength at such a young age - she was only 11 years old when she began writing a blog for the BBC insisting that all children had a right to education.

She continued to speak out even after she was shot and almost lost her life because she was so outspoken. Children can identify with her as a young girl and yet see her as a role model as well.

Q: The book's subtitle is "Warrior with Words." Why did you highlight that aspect of her life in the book? 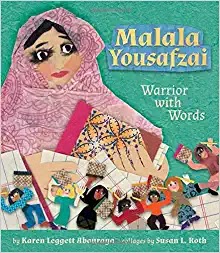 A: A warrior is engaged in some struggle or conflict – which certainly applies to Malala – but the critical part of her message is the power of words. She does not need weapons. “One child, one teacher, one pen, and one book can change the world.” We wanted to emphasize that right in the title.

Q: What do you think Susan L. Roth's illustrations add to the book?

A: Susan’s collages are made entirely of cut paper, found objects and fabric. She uses color, texture and all these odd bits to add powerful emotion to the story.

School Library Journal noted for example that “there are gorgeous, bright colors throughout, but the Taliban and events involving them are depicted in muted tones of black and gray.”

Whether she is depicting the lush valleys and snow-covered mountains of Pakistan’s Swat Valley or the chaos that awaited the Yousafzai family when they returned to their devasted town, Susan’s art generates intense joy or anger or sadness.

And then she cuts a world map into a dozen pieces as the background for children around the world who are emulating Malala. The images are dramatic and unforgettable and children understand them immediately. 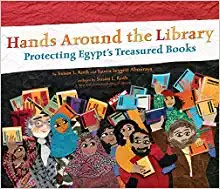 Q: What do you hope kids take away from Malala's story?

A: I want the youngest children to see that they can make their own voices heard on issues important to them – whether it’s joining a global education campaign or leading a campaign to stop bullying in their school or lobbying for a local law to lower the voting age.

The backmatter in my book lists several organizations that specifically encourage young people to participate and become leaders – including the Malala Fund.

A: I have discovered I really like highlighting the work of young activists and then engaging with kids in schools or bookstores to talk about their causes and passions.

My first book focused on young Egyptian protestors who surrounded the great library in Alexandria, Egypt, to protect it from vandals during the Arab spring (Hands Around the Library: Protecting Egypt’s Treasured Books).

I also expect to be working on stories about women who pursued their passions without regard for the obstacles along the way and without always getting much credit for their accomplishments.

A: I would want to remind your readers of all the effort that goes into writing children’s books. These authors are often dismissed as writing “just for children,” but look at the source lists and references in the best nonfiction books for children, the exquisite writing and imagination in fiction, to say nothing of the often exuberant illustrations.

Children are our most important audience and it is imperative that we give them the very best we can produce.

--Interview with Deborah Kalb. Here's a previous Q&A with Karen Leggett Abouraya.
Posted by Deborah Kalb at 5:45 AM