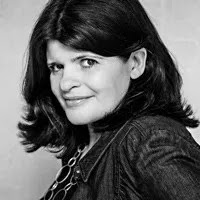 Laurie Gwen Shapiro is the author of The Stowaway: A Young Man's Extraordinary Adventure to Antarctica. It focuses on the life of Billy Gawronski, who stowed away on a 1928 expedition to Antarctica. Shapiro's work has appeared in a variety of publications, including The New Yorker and New York magazine, and she also is a novelist and documentary filmmaker.

Q: How did you first learn about Billy Gawronski, and at what point did you decide to write a book about him?

A: I mainly read literary nonfiction. I wanted to write the kind of nonfiction book I love to read -- think David Grann, Susan Orlean -- and was looking for a forgotten story.

But in the meantime I decided I would keep practicing on local stories as my experience was previously as a fiction writer and documentary filmmaker. In my mind I would write a nonfiction book that unfolded like a novel, using both of my skill sets.

Q: The book includes so many details about his life--how did you conduct your research, and did you learn anything that particularly surprised you?

A: I made a resolution in January of 2013 to switch agents to match my desire to write nonfiction. That happened right away based on my drive and past track record as a novelist. My new agent told me when you find a worthy true story you will know.

In the meantime, I decided to practice my nonfiction skills and practice a few crazy true stories in a shorter form. I had a few pieces picked up.

I started writing an article about the first Polish Catholic church in the United States, which was the church the stowaway’s family attended, but I did not know I had a stowaway to write about yet. 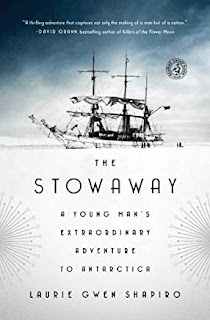 While looking at St. Stanislaus church hits in The New York Times online edition, I found mention of the kid, and thought that could be a book if I could only track down enough info. I only had a few hits but with some creative spelling I got a few more – people always spell long Polish names wrong.

Even then I still felt I could not write a full character – but the documentary maker in me wished I could find a descendant. I made a chart of 100 people with the last name on the East Coast near the ocean – he probably liked water! – and started calling.

Everyone would hang up on me when I said he jumped into the Hudson River and swam to a ship. I must have sounded nutty. I was certainly caffeinated! But on caller 16 I did my speech and the woman said in a soft aged voice – That was my husband. I got goose bumps! His elderly wife was alive! That shocked me. I was there in days and had true access.

Later on, to lend authenticity to my narrative, I actually went to Antarctica for over a month. I cannot stress how much that improved my ability to tell this true tale.

Q: How well known was Billy during his lifetime?

A: After August 1928 he was briefly extremely well known – his image was splashed on newspaper covers when he was caught, and his legend as the Stowaway Kid only grew as he continued to try and stow away.

When Admiral Byrd finally allowed him to go that was news again and people around the country followed his exploits. By 1931 he slipped out of news coverage with a few mentions over the years.

Q: What do you hope readers take away from his story?

A: I think it may be startling to learn there was a time when American Exceptionalism was cheered regardless of political party. The only time that recently happed was when man walked on the moon.

Also I am pleased when readers tell me that when reading my book they find history can be fun.

A: Another crazy true lost story. I am so happy to do this kind of writing. I feel I have finally found my milieu – I feel like I am good at it and not at all bored.

Every minute rescuing lost history is a pleasure.

A: Mainly, that this is not my first career as a writer. But I have used all parts of my past to move forward – my novel years, my years directing and producing true story documentaries, my journalism skills, and I am the happiest I have ever been creatively.