Amy Gottlieb is the author of the novel The Beautiful Possible. Her work has appeared in a variety of publications, including Other Voices and Lilith. She lives in New York City. 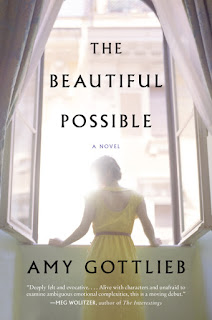 Q: What has been the reaction to the novel?

The Beautiful Possible was published over three years ago, and I’ve been humbled, surprised, and gratified by its reception.

The book was a finalist for a National Jewish Book Award, Edward Lewis Wallant Award, and Harold U. Ribalow Prize. I was invited to literary festivals in Australia, and spoke at college campuses, synagogues, and book groups -- in person and via Skype.

Most of all, I have been deeply moved by the generous notes I received from readers who were touched by my characters and their story.

I’m always passionate about finding work that teaches me about the possibilities of what fiction can do, challenging me to try something new.

A: I’ve dug into a new novel which takes place in an eroding Italian hill town, and I’ve recently completed a poetry manuscript.

--Interview with Deborah Kalb. Here's a previous version of this Q&A. Amy Gottlieb will be participating in the Temple Sinai (D.C.) Authors' Roundtable on March 23.