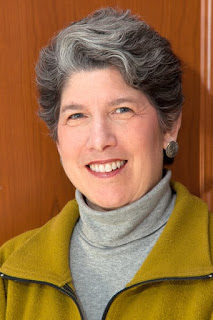 Laura Kumin is the author of The Hamilton Cookbook: Cooking, Eating & Entertaining in Hamilton's World. She is the creator of the MotherWouldKnow food blog, contributes to The Huffington Post, and teaches cooking and food history. She worked as an attorney for more than two decades.

A: Actually, I didn’t! The publisher came up with the idea. But all they had was a title. They figured they would get a ghostwriter, but [a consultant] said, I know someone who might be interested!

As a kid, I had enjoyed George Washington’s World, a book by Genevieve Foster that stresses the connections among historical figures and events. That “horizontal” concept motivated me to capture much more than just the food and recipes that Hamilton might have eaten.

Most of what I found was more geared toward the Founding Fathers who were Southern, and Adams, from New England. In order to decide what recipes were appropriate for Hamilton, I had to think about him and his family, rather than what was most popular. I looked at his background [in the Caribbean and the New York area] and that of his in-laws, who were from a farm near Albany. 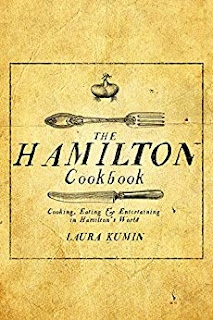 Much of my research on specific recipes comes from the old cookbooks themselves —I was in the rare book and manuscript room for a couple of days, and they let me touch and look through some of the very oldest cookbooks. I wanted an illustration, and there were not many in these books. The first time I touched one of those books, it was like touching a Torah! I was transported…

And people were cooking on fireplaces—“cook until done.” It isn’t temperature or time. In order to write a 21st Century version, I researched modern versions of similar recipes and used what I found to inspire me in updating the 18th Century recipes in the book.

A: The book has three distinct parts: Hamilton, his times, and food and entertaining. I learned something about each. (I had not seen the play before writing the book, nor did I listen to the music that Lin-Manuel Miranda used. I didn’t want to be unconsciously limited.)

In learning about Hamilton’s life, I was very touched by how tender and how physically brave he was. Our current president is neither tender nor brave.

The historical context for Hamilton gave me an appreciation for the great animosity between and among the founding fathers. I had not understood that. I hadn’t really thought about the fact that the Adamses, Abigail and John, detested Hamilton. Jefferson wasn’t a great fan of Hamilton’s either.

Another aspect of the context that enthralled me was learning how different the U.S. was at that time. In particular, I loved learning what New York and Philadelphia were like. The internet can be a beautiful thing. Using digitized census data from 1790, I learned how small these cities were. You don’t think about those things.

The American upper classes were trying to do things like their counterparts in France and England. There was great emphasis on rigid rules for how important meals would be set out and what should be included. Also, certain foods that we commonly eat today were thought to be either poisonous or simply not healthy - like tomatoes and potatoes.

But it goes farther back. This is a compelling dramatic story. Aaron Burr and Hamilton knew each other at all these stages. They were in the Revolutionary War together, they were lawyers in the same community, and had even been co-counsel on several cases. In the political realm, they were longtime rivals and their duel was not simply a spur of the moment decision to fight.

Part of the background that makes the Hamilton story so fascinating is the role of slavery in the non-Southern states. Contrary to what many believe in the 21st century (that slavery existed only in the American South and that the northern states and northerners were always against it), slavery was legal in Philadelphia and New York up until the late 18th century.

In fact, Hamilton himself bought slaves for his brother-in-law. And of course Washington and Jefferson owned slaves. When he dined with those men, Hamilton ate meals prepared by slaves and it is likely that slaves served Hamilton in other ways too, even though he never lived below the Mason-Dixon line. These facts make looking at the issues of slavery and how we should view people who were slaveholders more complicated.

Hamilton and his friends started a society to abolish slavery, but they did not expect or desire to end slavery suddenly. Rather, they looked toward a gradual abolition of the institution of slavery. And Hamilton was the only one [in the group] who didn’t own slaves.

A: Overall, I think people are surprised by what they learn from the book about Hamilton, his times, and the food and entertaining of that era. The title suggests that it is just a cookbook. While the recipes are fun to read and make - the book covers much more. Readers who are cooks have enjoyed making dishes that are familiar, like beef stew and gingerbread, as well as others less familiar, such as syllabub.

--Interview with Deborah Kalb. Here's a previous version of this Q&A. Laura Kumin will be participating in the Temple Sinai (D.C.) Authors' Roundtable on March 23.
Posted by Deborah Kalb at 6:57 AM