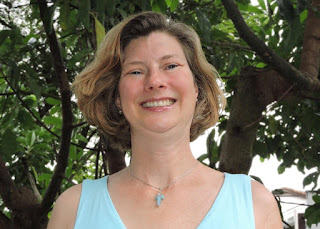 Natascha Biebow is the author of the new picture book biography The Crayon Man: The True Story of the Invention of Crayola Crayons. She edits the work of other children's book authors at Blue Elephant Storyshaping, and she lives in London.

Q: Why did you decide to write a picture book biography of Edwin Binney?

A: I was taking a non-fiction writing course and needed a topic. One day, I was watching a Sesame Street show with my son. Multi-colored crayons spun out of a huge sorting machine into the stadium-style yellow and green Crayola boxes. I was fascinated.

Today, children are given crayons almost as soon as they are born. But in 1900s, instead of colorful crayons, markers, paper and computers, children had a slate, clay and chalk. At home, they played with simple or homemade toys.

I imagined that, if you were a child in 1903 when the first box of Crayola crayons was made, suddenly your world would have been transformed. You could draw in bright colors that wouldn’t smudge and your drawing would last a long time. Wow! I set out to find out more about Edwin Binney, their Crayola crayons’ creator.

What I discovered is that Binney’s mission was to create safe, bright and affordable crayons so that children everywhere would have access to drawing in color.

I wanted to create a read-aloud story about the inventor of a toy that I loved as a child and about color, innovation and creativity. 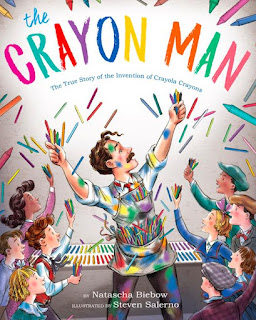 A: I did a lot of research about the story of the invention of Crayola crayons as well as the extended Binney family, company history, background, production and composition of crayons, Binney’s home town in Old Greenwich, Connecticut (his house still stands), and the general historical time period around 1903, when the first eight Crayola crayons were sold.

My sources included books, articles, videos, and websites, but particularly useful were librarians! I tracked down Binney’s great-granddaughter and interviewed her. I collaborated with Crayola and went to see the factory in Easton, Pennsylvania. I also visited the archives at the Smithsonian Museum of American History in Washington, D.C., where the company records are held.

I think the fact that I found most surprising was how much Binney loved nature and how he brought bouquets of flowers and produce from his garden in to the Crayola offices and factory to inspire his team.

Also, I was amazed how the Crayola crayons are still made in much the same way today, in Easton, Pennsylvania, as they were in 1903, though some of the new machinery produces crayons at a jaw-dropping speed – it is really cool!

Q: What do you think Steven Salerno's illustrations added to the book?

A: Steven Salerno has masterfully captured the story, which is all about color! The book starts out mono-color, with lots of tones of black and gray, because Edwin Binney worked producing carbon black, a substance used in printing inks, shoe polish and electric street lamps in the 1900s.

As Binney embarks on his quest to develop the Crayola crayons, the pictures show a gradual transition to color, until finally, at the end of the book when Crayola invents even more crayon colors, kids everywhere are empowered to draw anything!

I also admire how Steven Salerno captured Binney’s world so accurately, while at the same time infusing it with fun and verve. Between us, we referenced everything possible so as to create a historically accurate version of this special story. If you’re interested in Steven’s fascinating process, you can read more about it on his blog.

A: Edwin Binney had a knack for listening and making what people needed. He loved nature and it was the inspiration for the bright colors he wanted to create in the crayons. Still now, we are learning so much from nature!

Binney was also a generous entrepreneur who gave back to his community. His flair for innovation, creativity, persistence and ability to listen are all attributes that future generations will need to make our world a better place.

I hope young readers will be inspired to tap into their love of color and create something amazing! In this fast-paced world of ours, where kids are so often on devices, I’d love it if the book were to encourage kids to just doodle with crayons.

A: I have written some new non-fiction picture books and am also writing a series of chapter books, which is a new venture for me.

A: Alice, Edwin’s wife, is the person who coined the name “Crayola” – she was a retired schoolteacher, and encouraged Binney. My favorite Crayola crayon color is periwinkle blue – what is yours?