Maura Roosevelt is the author of the new novel Baby of the Family. Her work has appeared in various publications, including The Nation and Vol. 1. Brooklyn. She teaches writing at the University of Southern California.

Q:  How did you come up with the idea for Baby of the Family?

A: I’ve always been interested in how families are made, and the tales that become family lore.

The novel actually began with a short story that I wrote, that was only about Shelley and how she left college, broke and unsure about her future.

After writing that short story, I began to imagine what Shelley’s life was like in the past, and then I began writing about her family. Roger emerged, and then Nick. And then all these other characters popped up, and I had an early draft of the novel…

Q: As the great-granddaughter of Eleanor and Franklin D. Roosevelt, how much was your creation of the Whitby family affected by your own family’s history?

A: This book is very much a work of fiction—the Whitby family is very different from my own family. The main similarity between my family and the book, though, was that my grandfather was married four separate times. (My grandmother was my grandfather’s second wife, but she bore no resemblance to Brooke’s mother at all.) 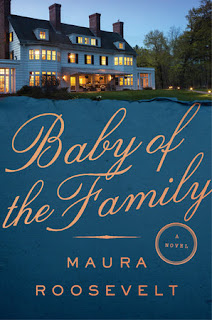 My own nuclear family is also very different from the Whitbys-- my parents have only ever been married to each other, and they have been married for many (more than they'd like me to list!) years. I have only two full sisters, as well.

That being said, my family had sort of an "open-door" policy growing up. There were always a lot of people in my house, and often cousins and family friends and sister's boyfriends would live with us. Due to this fact, I have always felt like I was part of a large and complicated family, which is similar to the Whitbys.

Q: The Whitby family includes many characters—how did you choose which ones to focus on in the novel?

A: As I mentioned earlier, the novel really started with the Shelley character, and the other characters sort of grew out of my development of her.

I knew I wanted to focus on Shelley’s family—I am fascinated by how one’s family affects his or her adult personality and actions. (I could only read novels about complicated families for the rest of my life, and be happy!) So creating siblings for Shelley and then focusing on them brought me a lot of joy in the writing process.

A: What a cool question! The title is a little bit of a joke, in my mind. The “baby of the family” is typically the one who is over-loved by their parents, and given a lot of affection and attention.

But there’s some other aspects of the book that tie into the title too—for example, the baby of one of Roger’s family was Peter, who died as a child. And Brooke believes that the death of her little brother changed the course of her family and her life drastically.

A: I’m currently working on a new novel, but this one is very different from Baby of the Family. The new one is much shorter, told in the first-person, and set in Boston and Los Angeles.

A: With the Whitby siblings, I tried to craft characters who weren’t necessarily admirable, but were understandable and human in their desires and disappointments.

And I’d also hope that people chuckle about how hard it is, for everyone, to grow up!