Jill Santopolo is the author of the new novel More Than Words. Her other books include The Light We Lost. She is the associate publisher of Philomel Books, and she lives in New York City.

Q: How did you come up with the idea for More Than Words, and for your character Nina?

A: Much like The Light We Lost, More Than Words began from a personal experience. My father passed away in 2015, and even though it didn't know it then, that started me down the road toward writing this book.

In the following years, I was thinking a lot about life and death and legacy and what parents leave behind for their children and in their children. That rumination became the heart of More Than Words. 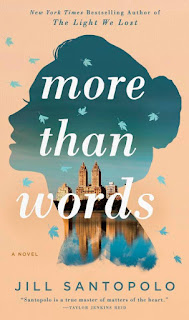 As far as Nina is concerned, I love living in New York City in part because there are so many circles of people who inhabit it. With Nina, I wanted to take a peek into a circle that isn't mine--the circle of old money--and play around there for a while.

A: I didn't! I revised this novel pretty heavily as I was working on it, and the three major drafts of it had three different endings. Where I ended now finally felt right to me, both in content and in what the reader does and doesn't know when they close the book. 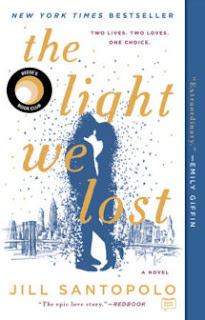 A: My editor, Tara, actually chose the title for this one--and I love it. To me, it means that there are some things in life that feel too big to be expressed in language. And so much of the experience of love and loss is sometimes like that. There aren't words to explain sufficiently how we feel. And that's what Nina grapples with in this story.

A: I've just finished a synopsis and the first 39 pages of a (hopefully!) new book that I send to my editor to see what she thinks. So fingers crossed!