Boris Fishman is the author of the new memoir Savage Feast: Three Generations, Two Continents, and a Dinner Table. He also has written the novels A Replacement Life and Don't Let My Baby Do Rodeo, and his work has appeared in a variety of publications, including The New Yorker and The New York Times Magazine. Born in Belarus, he immigrated to the United States as a child.

Q: Why did you decide to center this memoir around food?

A: After my grandmother, our previous kitchen wizard, passed away, this Ukrainian woman, Oksana, showed up in our lives -- officially to help take care of my grandfather.

But she was, and is, a phenomenal cook, which went such a long way toward -- if not smoothing over, then postponing -- the various grievances we were struggling through as an immigrant family with adults still living the Soviet way and an only child who grew up to be someone very different. For the duration of those meals, we were happy, we got along. 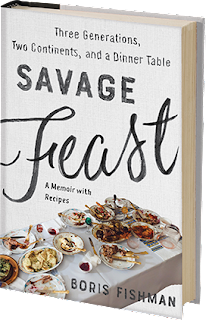 And Oksana's presence in general was its own useful vector. She became a member of the family in every sense except the literal, and that angle of separation was often enough to put us on better behavior. Also, she became for us the ear, and the shoulder, and the sounding board that we often failed to be for each other.

But to go back to the food, the things she put on the table three times a day were part of an incredibly rich tradition of cooking that most Americans know nothing about -- a completely different perspective on what people think of as "Russian" or "Soviet" food.

This wasn't mayo-heavy glop -- this was peppers marinated in buckwheat honey and garlic, pickled watermelon, duck roasted with apples and dried apricots, rabbit braised in sour cream with new potatoes, and so forth.

Q: Was the process of writing this book different from that of writing your novels?

A: The process of writing the book was not. Stylistically -- the characterization, the dialogue, the narrative development, the quality of the writing -- it's a novel as much as either of my previous books. 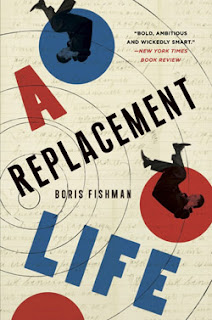 What was incredibly challenging was translating all the recipes from Oksana's brain, the only place they exist, to paper, and then to English, and then testing them, and generally getting them to a format any cook could replicate.

Q: Did you need to do much research to write the book, or did most of it come from your own memories?

A: I remember almost nothing from my childhood, so most of that actually came from extensive interviews with my parents and some other people in our lives.

I did a lot of reading about Russian/Ukrainian/Soviet food, and food in general, and also some background reading to the issues that arise in the book, like Nadezhda Mandelstam's memoir of the Stalin Terror, Hope Against Hope, or Gal Beckerman's invaluable book about the Soviet-Jewish immigration, When They Come For Us, We'll Be Gone.

We went through that immigration, but it was a revelation to read about the global forces -- literally, and figuratively -- that had bearing on it.

Q: The book deals with immigrants making their way in a new country. What do you hope people take away from this book, given the current debates over immigration? 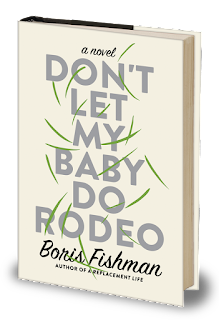 A: Whiteness indisputably confers privilege, but whiteness is not a vaccine against trauma. I would really like people on the left to understand that.

A: I just wrote a season of a TV show that fuses themes from my first novel, A Replacement Life, and this new book.

A: Many, many thanks for your interest in my work since the very beginning.

--Interview with Deborah Kalb. Here's a previous Q&A with Boris Fishman.
Posted by Deborah Kalb at 6:06 AM