Dana Czapnik is the author of the new novel The Falconer. She has worked for ESPN: the Magazine, the United States Tennis Association, and the Arena Football League. She lives in Manhattan.

Q: How did you come up with the idea for The Falconer, and for your character Lucy?

A: I’ve always known I wanted to write a bildungsroman about a young woman like Lucy. I’d never read about a female athlete in literary fiction and I think the experience of being a woman in a space that’s been traditionally occupied by men is a way to open the door to writing about gender and navigating womanhood.

I also knew I wanted her to be a young woman who is open to the world, even as she’s often times questioning it. My favorite young male characters are ones who are searching for their own philosophy and grappling with the injustices of the world. I wanted to write a book that creates the space for a young woman to have that same experience.

I also was interested in writing about New York in the early ‘90s, just before the money started to take over, and the lives of a group of young people at the time – young people who grew up in the shadow of their parents’ generation and are both envious and skeptical of their contributions.

Q: The novel has been compared to The Catcher in the Rye. What do you think of that comparison?

A: I’m deeply flattered to be mentioned in the same breath as Salinger, who remains one of the greats of literature. And of course, I thought a lot about Holden while conceiving of this novel – specifically Salinger’s mastery of teenage speech and expression. 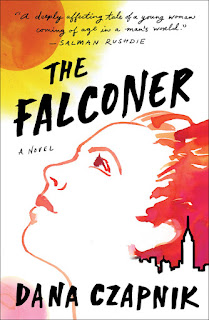 But though there are echoes of Holden in Lucy, in many ways she is the antithesis of him. They do not share the same worldview. At this point though, it has come up so much, I really hope potential readers know that my book isn’t Catcher in the Rye with a Girl.

Q: Can you say more about why you chose to set the novel in 1993-4, and do you think Lucy's story would have been any different if it were set today?

A: Oh, the story would be entirely different if it took place today because of cell phones and the ubiquity of the internet and sexting and pornography and social media – not to mention the current political situation and the fact that kids keep dying in school shootings and apparently America is okay with it, which must send a message to children and teenagers they are not valuable at all.

I set it in that time period because I was interested in writing about kids during the last moment before the internet took over our lives, who were the products of baby boomer parents, and about New York before it became the playground of the rich instead of the young and scrappy.

I’m in the same generation as Lucy, though slightly younger than her, and we’re this small generation sandwiched between two of the largest most influential generations on Earth – the Boomers and the Millennials – and we are the first generation of women to have been born into a country where we have total theoretical access and autonomy. And with that has come many growing pains.

Q: New York City is almost like another character in the book. How important is a sense of place in your writing?

A: Having only written one novel so far, I really can’t say what I will do with place as my career progresses. But for this novel in particular, place was extraordinarily important to me.

I grew up in Manhattan and still live here, and The Falconer is both a love letter to the New York I grew up in as well as a critique of it. It’s a beautiful, flawed, angry, unpredictable, alive city and those are all the traits I love to find in actual characters in a novel.

New York is seen entirely through Lucy’s eyes, though, so even when you’re seeing New York in the novel, what you’re really seeing is Lucy.

A: I have a few things I’m working on, but not quite ready to talk about them yet. Hopefully soon!

A: Just want to say thank you for the interview. I’m extremely flattered and excited that people like you are taking notice of my book. I hope your readers enjoy it!