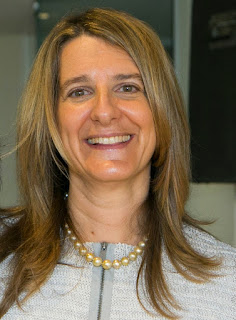 Shira Sebban is the author of the new book Unlocking the Past: Stories from My Mother's Diary. Her work has appeared in a variety of publications, including The Sydney Morning Herald and The Guardian. She is based in Sydney, Australia.

Q: Why did you decide to write this book about your mother's experiences in Israel in the 1950s?

A: As I explain in the book’s preface, after our mother Naomi’s death in 2013, my sister and I discovered a “non-descript, navy-bound volume … stashed away in a drawer of the massive wooden study desk at which [she] had worked as an academic economist for so many years.”

Imagine our surprise to find a diary, which “reads like a film script, relating vivid experiences in the Israel of the mid-1950s” of a young, passionate career woman whom we did not recognize.

“I had long abandoned any hope of uncovering more details of my mother’s past, her memories having gradually been extinguished by Alzheimer’s disease, which had afflicted her for the last decade of her life. Now, 60 years later, as I turn the diary’s yellowed pages filled with her distinctive script, I feel grateful for the opportunity to discover her anew … becoming acquainted with the person she once was before I was born.”

I thus felt compelled to write this book based on her diary, as it allowed me to explore what life was like in the new State of Israel through the eyes of Naomi as she was then: A still single, late 20-something woman searching for love, who was also somewhat of a stranger in her own land, having returned after a decade away in Australia.

Q: The book is based on your mother's diary, but you write it as "creative non-fiction stories." Why did you choose this form to tell your mother's story?

A: Originally, I wrote an overview about my discovery of the diary and submitted it to the Jewish Literary Journal. The New York-based editors, however, suggested that I focus instead on one or two of Naomi’s diary entries and make them a story on their own.

I did not want to fictionalize my mother’s diary. It was very important to me to convey her life in 1950s Israel as accurately as possible, and so I decided to teach myself how to write creative non-fiction, or as Lee Gutkind, “the god-father of creative non-fiction,” puts it, “true stories well told.”

Having started in academia, before becoming a journalist, creative non-fiction was a completely new challenge for me. I have found this genre to be liberating as it is all about writing in scenes, allowing me to use literary techniques, such as description and dialogue, to immerse the reader in the action. 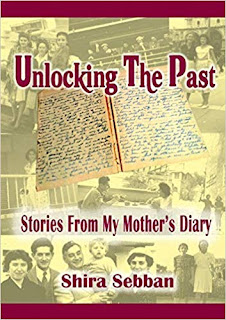 I wanted you to feel as if you were walking down the streets of the divided city of Jerusalem or winding your way through Tel Aviv’s Carmel Market with Naomi, who thus became a character in her own story, which I changed from first to third person.

The Jewish Literary Journal ended up publishing my first creative non-fiction short story, “Blood in the Market,” in September 2014, and it now forms Chapter 8 of my book.

Q: Did you need to do much research to write the book, and did you learn anything that particularly surprised you?

A: Yes, I had to do a considerable amount of research in order to understand what life was like in the foundation years of Israel. As I explain in the Acknowledgments, writing the book “has been like putting a puzzle together, piece by piece, interspersing my mother’s personal experience with historical facts,” where it is crucial to be precise.

1950s Israeli social history has become a respected field of study in its own right, enabling me to learn intimate details about daily life, ranging from Tel Aviv café culture and the party scene to living under sniper fire around the desolate stretch of no-man’s-land between west and east Jerusalem.

Google maps proved to be a wonderful resource, as I traced the routes Naomi would have taken, while the archivist from Tel Aviv’s Cameri Theater kindly provided me with the very programs she would have seen.

A particularly arresting image, which I describe in the book, was how until 1967, an “old, dark and airless bus, crudely covered in armor plate” would make the trip along the one perilous road connecting the Jewish part of divided Jerusalem to Mount Scopus, “the driver peering through a narrow slit across the front window.”

While I was aware of the constant state of insecurity in which Israelis have always lived, it was striking to learn too how tough life was in the early years of the State. Indeed, many of those Naomi meets are keen to seek opportunities overseas. As she writes, they “claim to be great Zionists; still seem to be pleased to stay out of Zion.”

Q: How much did you know about this period in your mother's life before finding the diary?

A: I actually knew very little about this period in my mother’s life. After leaving Israel, Naomi would travel through Europe before settling in Canada where she eventually married and had a family.

As I write in the Afterword, “in later life, as Alzheimer’s took its toll and her vast world became more circumscribed, she clung to these European memories, constantly repeating them until they were virtually the only part of her past she could recall.”

While I was also familiar with stories from her poverty-stricken childhood in Mandatory Palestine, she rarely spoke of life in Israel in the mid-1950s – the period covered by the diary, when she was a post-graduate scholarship student at the Hebrew University of Jerusalem.

A: In addition to my writing, I am a volunteer refugee advocate as well as a guide at the Sydney Jewish Museum, combining lessons learned from Jewish history and notably the Holocaust with my passion for social justice.

I am hoping to share the stories of some of the asylum seekers I have helped, but only when their status is secure enough for me to do so.

Please see my website for more of my published writing.

I also have family letters in Yiddish, dating back to the 1930s, from my great aunt in Lodz to her sister, my maternal grandmother Chana, in Tel Aviv. Chana also features in Unlocking the Past as she was still living in Tel Aviv when her daughter Naomi returned in the mid-1950s.

While Chana’s parents and sister had come to Palestine in the mid-1920s – even prior to my newlywed grandparents – they had made the tragic decision to return to Poland after losing all their savings, only to perish in the Shoah. I am currently having the letters translated and am hoping to uncover more details of my family history.

A: Unlocking the Past: Stories From My Mother’s Diary can be purchased as an e-book or paperback from Amazon or Mazo Publishers.

Please see here for the launch hosted by the Sydney Jewish Writers Festival.

The book will be launched by Dr. Leah Kaminsky, prize-winning author of The Waiting Room, on 2 December 2018 at Melbourne’s Lamm Jewish Library of Australia.

We are currently working on a Hebrew edition, which will be launched in Israel at the end of the year.