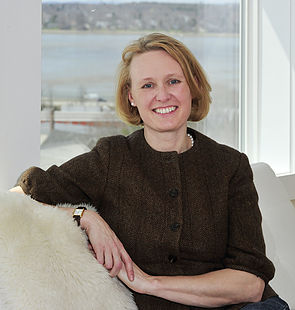 Tilar J. Mazzeo is the author of the new biography Eliza Hamilton: The Extraordinary Life and Times of the Wife of Alexander Hamilton. Her other books include Irena's Children. She is the Clara C. Piper Associate Professor of English at Colby College, and she lives in Maine, New York City, and British Columbia.

Q: Why did you decide to write a biography of Eliza Hamilton?

A: I had just finished writing Irena's Children, about one inspiring woman who helped the children of other people, and I was interested in the story of how Eliza Hamilton also did pioneering work and helped to found the first private orphanage in New York (which is still around today as Graham Windham).

Q: How would you describe the relationship between Alexander and Eliza?

A: Eliza was stoic and deeply loyal, and for Alexander that meant everything. 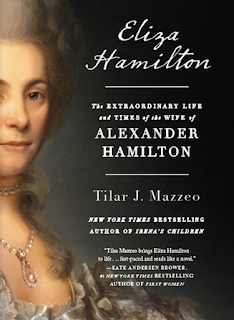 Q: What do you think accounts for the ongoing fascination with the Hamiltons, especially considering the musical's popularity?

A: I think we all find it fascinating to see the "real people" behind the founding of the American republic--and of course everyone loves a great love story.

A: My focus was on telling the story of Eliza and her family, including the Schuyler sisters and brothers, and so I wasn't focused in my research on the affairs of state but on domestic family correspondence.

Those family archives were in places ranging from New York City and upstate New York to Michigan, and they were a wonderful sneak peek into the private life of Eliza and her circle.

What surprised me most was learning that many people at the time--and some very important scholars since--believe there never was an affair [between Alexander Hamilton and] Maria Reynolds.

--Interview with Deborah Kalb. Here's a previous Q&A with Tilar J. Mazzeo.
Posted by Deborah Kalb at 6:10 AM