Rena Potok is the editor of the new book The Collected Plays of Chaim Potok, which focuses on the work of her late father, the author of The Chosen, The Promise, and other books and plays. Rena Potok is a professor of literature and writing at Villanova University, and also a novelist and poet.

Q: How did this new edition of your father's plays come to be?

A: When I was an editor at the Jewish Publication Society, I worked with Netanel Miles Yepez on two books of Hasidic folktales that he wrote with Reb Zalman Schachter-Shalomi.

Several years later, Netanel had the inspired idea of publishing a first-ever volume of my father's collected plays with his imprint, Albion-Andalus. By that time, the stage adaptation of The Chosen had been enjoying a healthy run, but none of the others had been produced or published since they premiered in the early 1990s.

I was excited about the prospect of reviving my father’s plays and giving them a new, expanded audience. Then came the task of resurrecting final scripts from old floppy disks and corrupted computer files, and checking them against VHS tapes of performances and the surviving notes and memories of the directors who created the original plays for the stage.

This volume is the cumulative effort of directors David Bassuk, Carol Rocamora, Aaron Posner and yours truly. It is published by Adam Kadmon, a joint imprint of Albion-Andalus and Monkfish Books.

Q: In your introduction to the book, you write, "This notion of culture confrontation and fusion is the deliberate, carefully constructed focus of my father's writing." How does that focus emerge in his plays?
A: Every one of the main characters in the plays experiences a profound, life-changing confrontation between his core culture and the broader world culture with which he comes into contact. The more they confront, and ultimately fuse, with another culture, the more the characters in the plays grow as individuals, thinkers, artists.

For Asher Lev (The Gallery) and Danny Saunders (The Chosen), the conflict is between the insular Hasidic world of their fathers and the secular worlds of modern art and psychoanalytic theory. For S. Ansky (Out of the Depths), it’s the confrontation between his Orthodox Jewish upbringing and the world of secular Russian culture and politics. 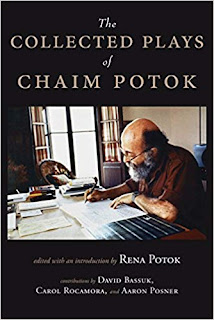 With other characters, the confrontation resists cultural fusion – and there are serious consequences. Rabbinical students Michael and Alex (The Carnival) are betrayed by a would-be ally and lose their money, their innocence, and some of their faith in human nature.

Arthur Leiden (The Play of Lights) is torn apart by the struggle between his role as a Jewish army chaplain in Korea, his obsession with Japanese culture, and crippling guilt over his father’s role in the destruction of Hiroshima and Nagasaki.

Q: Did you need to do much research to edit the book, and did you learn anything about your father's work that surprised you?

A: I spent many hours poring over notes, newspaper clippings, reviews, and other materials in the collection of the Chaim Potok Papers at the Kislak Center for Special Collections, Rare Books and Manuscripts at the University of Pennsylvania. There, I discovered the history of the plays, and their development and production.

I also talked at length with David Bassuk, who collaborated with my father on Out of the Depths, and I learned about my father’s creative process, and how he taught himself to become a playwright and to adapt powerful moments of history and narrative fiction to the stage.

Q: How would you describe your father's legacy today?
A: My father saw the truths of multiple cultures, identities, and ways of living as equally valid and rich. His novels, plays and essays illuminate pathways to navigating cultural difference; they show that pushing against boundaries expands and enriches the individual and the community.

His lessons on respecting and nurturing ways of thinking and believing that may seem foreign to us – are more important now than ever.

We are living in a time when fundamentalist views abound about the singular “truth” of religious and political ideologies. We are seeing the translation of those views into inhumane actions and policies: forced separations of families and imprisonment of children at our southern border, removal of protections for such vulnerable populations as disabled and LGBTQ teens, a rise in hate speech and hate acts against the “other.”

Through his writing, my father expressed the understanding that when we let go of the idea of the “other” as threatening, we are enriched by the encounter. The importance of that basic understanding cannot be underestimated, especially today.

Q: What are you working on now?
A: I’m currently revising a novel that tells the intersecting stories of four women through the landscape of gardens, memory, secrets and truth, set against the backdrop of pivotal events in 20th and 21st-century history, in Poland, New England, and Jerusalem.

I’m also writing a talk on representations of borders and women’s bodies in Northern Irish and Palestinian Israeli literature, for a symposium on immigration at Villanova University in September.

Q: Anything else we should know?
A: Chaim Potok’s plays open a window into intimate moments in the lives of the protagonists of his novels and the life of S. Ansky. They also give voice to other characters in a way that the first-person narration of the novels does not.

The Collected Plays of Chaim Potok is the complete, authoritative text of his dramatic writing, and an important contribution to the cannon of Modern Jewish American Theatre.