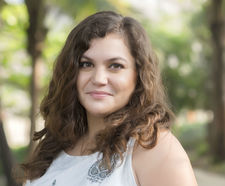 Leah Franqui is the author of the new novel America for Beginners. She is also a playwright, and has worked as a chef, a real estate agent, and a sewing teacher. A native of Philadelphia, she lives in Mumbai, India.

Q: How did you come up with the idea for America for Beginners?

A: The idea for this book really came from the tour of the United States that my now in-laws took in 2014.

They reacted to me in fascinating ways. They were extremely warm and welcoming and great, but they felt so fragile, so helpless, in really interesting ways. They didn’t go places alone. They depended on my husband for everything. They took this tour, which my husband went on with them, and he just loathed it deeply, but even though it exhausted them, they sort of liked it.

They covered six cities across the States in 11 days, and the trip guaranteed 11 Indian dinners. The places the tour company picked for them, most of them were places I’ve never gone, or would go, like Niagara, and Vegas. But for my new Indian family, that is America, and that’s so interesting to me.

My mother-in-law came back and stayed with my husband and me for a month when we got married a few months later. This is typical for Indians, although I found it insane and a bit of an imposition. But it did give us a chance to get to know each other better, and for me to learn more about her.

She was unlike my parents; uncomfortable with people of different backgrounds, horrified by homosexuality, but also she was like my parents, she was and is adaptive, so smart, empathic when she has context. All those things living in one person fascinated me. I was glad she stayed, even though I was happy when she left.

Those two experiences combined became the foundation of this novel. 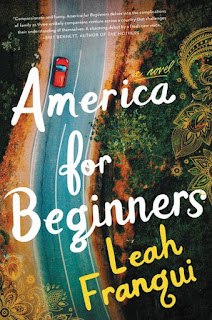 Q: You tell the story from various characters' perspectives. How did you select your point-of-view characters, and did you write the chapters in the order in which they appear, or did you focus more on one character before turning to another?

A: This novel went through a lot of iterations, and initially every character got chapters in a certain order. Then, with the help of my agent, I realized that didn’t serve the story, and we moved things around, and it’s much better now. But right from the start, I knew I wanted multiple perspectives.

See, the thing about travel is, that everyone’s experience is so singular, but their experience becomes the country for them. This has certainly been my experience living in India. I can talk for hours about what India is, but the truth is, that’s just what India is for me.

So because I wanted to talk about my country, I figured the only way to do it was to have different people present their feelings, because they would all be true, for a given value of truth.

I think the characters sort of rose organically. I didn’t ever have other people in the mix, it was always these four people, Jake, Pival, Satya and Rebecca.

They were the people who made sense to me, two people searching for something they’ve lost, two people escaping something. Three people on a trip, one waiting, without knowing that he is doing so. He is the beacon, and they are the ship. It just worked for me. I wish I had a better more strategic answer, but that’s it, it just made sense to me. I don’t regret it!

Q: How did you select the locations your characters traveled to, and how important is setting to you in your writing?

A: So, these tours are real. People really do these, thousands of them. There are tours set up for Indian tourists and I researched them and they are variations on a theme. That’s how I picked the destinations, and of course I was guided by my in-laws and their trip.

One thing that’s weird is that many tours stop at the Corning Glass Museum, which is just so strange, because first of all, do all these people have a burning passion for glass? Probably not, it probably speaks to the docile nature of tour groups.

I would never take a tour like this, I just want to state that for the record.

I think setting is really important. It’s an essential part of story, it’s one of the tenants of Aristotle in the Poetics, where a story happens matters. Place informs action.

In this novel, the act of travel informs the story, these people are stuck together, and they are there to see things, it gives the story structure, it gives it a ticking clock, that all works to the good, I hope!

Q: You note that you did a lot of reading and research to write the novel. Did you learn anything that particularly surprised you?

A: Well, I really knew nothing about Bangladesh or its history before I started working on this novel, so I guess it surprised me that I had no idea that in 1971 this massive conflict displaced over 10 million people and totally altered multiple nations, but that’s sort of telling, in a way, too.

After all, things like that happen all the time and we don’t hear about them in the West, and that’s sort of the feeling I tried to give Rebecca, like, wow, the world is big and I should know more about it.

I also didn’t know much about tours before I started writing! And now I know more than I ever needed to know.

A: I’m working on a few things, some new novel ideas, a television show, some screenplay concepts. I’m always pretty inundated with story! And of course, I’ve been remiss about updating my sewing blog because I’ve been busy with America for Beginners, so I’ve got to catch up on that!

A: When it comes to this novel, I hope that readers take away the feeling that it’s never too late, or too early, to start over, to change your life. Movement and change are scary and loss is devastating, but standing still is another way to say paralyzed.

Perhaps this is a new world mentality, but I believe it, I believe that internalizing Frederick Jackson Turner’s thesis about new frontiers as a way to keep exploring the world is something that can help you stay open.

Growing is a choice, and you must keep making it if you want it to keep happening. Bravery is contextually defined, but it’s worth trying to achieve, because it begets itself.

This is going to sound sappy, but I actually really do believe that what connects us is more important and persuasive than what separates us, and that exploring the world will remind you of that, time and again, while digging down into the depths of your own assumptions and experience can close you off to that.

I hope that people feel some sense of that when they read this book, and that they feel connected to these characters, and inspired to begin something new in their own lives, no matter the scale, no matter how painful, because it’s worth it.

I still believe, more fiercely and fully than ever before, that we need to be looking for what connects us so we can be good to each other, be kind, keep giving, keep fighting for a country and a world that celebrates what makes us different.

The New World, in theory, is a place where you can come and what you are is supposed to be more important than what you have come from. I believe in that, in making that promise a reality, and I think we have to keep doing that work daily. I hope readers take that away, too, that mission.