Taylor Brown is the author of the new historical novel Wingwalkers, which features William Faulkner as a character. His other books include the novel Pride of Eden. He lives in Savannah, Georgia.

Q: You've noted that the inspiration for Wingwalkers came from some lines in a biography of William Faulkner. Can you say more about why you decided to write Wingwalkers, and why you were especially interested in Faulkner and his work?

A: I'd say the book really got off the ground (ha!) when I saw a photograph of a young Faulkner in his RAF flying uniform at Square Books in Oxford, Mississippi.

My father was a pilot, I'm a lifelong lover of aviation, and I was already interested in writing something set during the early days of flight. What's more, Faulkner is one of my favorite authors, so it seemed like destiny, almost!

I immediately dived into this part of the author's life, and soon realized that aviation was more influential in both his work and personal life than I'd ever imagined.

That said, I didn't want to write a novel just from Faulkner's perspective. I wanted my own characters, too, and I found them in Joseph Blotner's biography of Faulkner, which you mentioned.

During Mardi Gras 1934, Faulkner attended the opening ceremonies of the Shushan (now Lakefront) Airport in New Orleans, which was a grand spectacle at the time, and the last night of the weekend, he didn't come home.

When he turned up the next morning, he told a tale of "accepting a ride from two motorcyclists, a man and a woman. They were aviators at the meet, and he had joined them in drinking, flying, and carousing."

When I could find nothing more about these aviator-motorcyclists in the biographical or historical record, I knew I'd found my story, full of questions to be answered: Who was this daring duo, how did their lives intersect with Faulkner's, and what were the consequences of their meeting? I felt as though I'd found a waiting cockpit, and I jumped in!

Q: The author Paula McLain said of the book, "Taylor Brown writes with rare energy, spinning out history with the force of myth." What do you think of that description, and how do history and myth factor into the story?

A: Paula has been very kind to say that of my work, and I do think she's onto something in my fiction (though I can't say it's something I do deliberately). I do like to take a slice of history, populate it with characters, then live and breathe among them, riding (writing?) along with their journey. 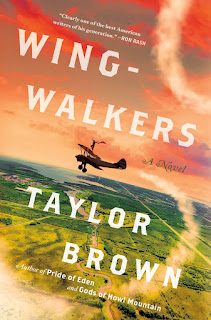 There's always a slight strangeness to such characters, as they occupy worlds at once so different and so similar to ours, and their stories help to tell us who we are, how we came to be, and how our present world and culture evolved to what it is today -- which is one of the great powers of myth, I believe.

A: Oh, I have to say I had fun researching this one.

Of course, I delved into the many biographies of Faulkner, along with the memoirs of his brothers (pilots all), descendants, and friends. I also got to dip back into my library of Faulkner softcovers from my college days, each well-inked with highlights, underlines, margin notes, and more.

Even more special was tracking down some of the folks who had stories to tell, such as Wyatt Emmerich, a Mississippi newspaperman whose grandfather, Robert "Baby" Buntin, gave Faulkner flying lessons during their Ole Miss days.

What surprised me most were the unexpected insights I had into Faulkner's character, which leads directly into the next question!

Q: What would you say are some of the most common perceptions and misconceptions about Faulkner?

A: I think we tend to lump Faulkner in with other male American modernists like Hemingway and Fitzgerald, but Faulkner was such an outsider compared to them.

While they were in 1920s Paris, gallivanting about with the literary avant-garde, Faulkner was at home in Mississippi, where he wasn't taken seriously. Hell, people in his hometown of Oxford called him "Count No 'Count," and both his father and uncle thought he wouldn't amount to anything.

We also tend to have a macho idea of him -- whiskey, tobacco, horses, etc. -- not unlike Hemingway, but he doesn't come off that way at all in the writings and memories of his friends, relatives, biographers.

He was much more of an endearing rascal, it seems to me. You know, when his early poetry wasn't getting accepted, he started copying famous poems and sending them off to the big literary magazines, getting them rejected. (Coleridge's "Kubla Khan," for example, which The New Republic rejected.) Something of the trickster in him, perhaps.

Though WWI ended before he earned his wings, he came home from RAF flight training affecting a limp, telling people he had a silver plate in his head from an air crash. It was like his imagination was just too big for reality, and it overflowed right into his work.

A: For the last several years, I've been hard at work on a book set during the West Virginia Coal Wars. I don't want to give away too much, but I hope it will help resurrect the lesser-known history of Appalachia, which is incredibly empowering, and help reshape how we think of a region that's been vilified for far too long.

One of the characters is based on my great-grandfather, who emigrated from Mt. Lebanon, Syria, at the age of 14 (without his family!), went to medical school at the University of Kentucky, and became a prominent physician in rural Kentucky.

I've also been hard at work on a new book that's something of a contemporary Western, but which draws heavily on Wild West history and myth.

A: My previous novel, Pride of Eden, came out during the now infamous month of March 2020, just as the world locked down for the first time. Believe it or not, it's set in a big cat sanctuary, came out the same week as Tiger King, and deals with a lot of the issues that the show highlights!

Though it won the 2021 Georgia Author of the Year Award for Literary Fiction, it largely slipped through the cracks due to the larger issues at play in the world. So it's another one to put on your TBR list if you enjoy Wingwalkers!