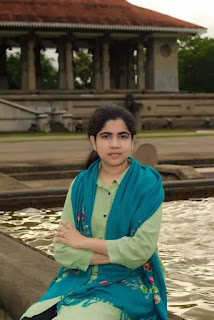 Nizrana Farook is the author of the middle grade novel The Boy Who Met a Whale. Her other books include The Girl Who Stole an Elephant. Born and raised in Sri Lanka, she lives in England.

Q: What inspired you to write The Boy Who Met a Whale, and how did you create your characters Razi, Shifa, and Zheng?

A: I wrote my first book, The Girl Who Stole an Elephant, which is a tropical adventure story set in a fictional Sri Lanka. I was born and raised in Sri Lanka so the book gave me a chance to write about the country of my childhood in a fun adventure.

With The Boy Who Met a Whale, I returned to the same setting but placed the story by the sea. I'd lived by the sea all my life in Sri Lanka and wanted to put in all the beautiful sights and sea creatures and excitement of that place.

Razi is the hardest character I've ever written. He revealed himself to me very, very slowly, and I only fully understood him in the very final draft of the book.

I created Shifa as the opposite of him, as I felt that he needed a presence like hers to grow and learn. They've both undergone the same bereavement but act in totally different ways.

I needed a Mysterious Stranger to arrive on their sleepy shores and kickstart their adventure, and that's where Zheng came in. He was such a fun character to write.

Q: The Publishers Weekly review of the book says, "Farook draws from Sri Lankan geography, ecology, and culture, punctuating the text with vivid descriptions of Indian Ocean port city Galle, marine life, Razi’s fishing village, and delicious Sri Lankan foods." What do you think of that description, and how important is setting to you in your writing? 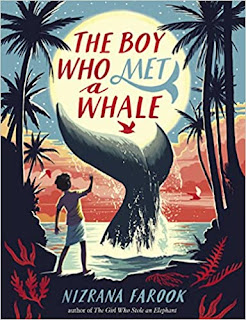 A: That review means everything to me! Setting is very important to me because this is a part of the world that we haven't seen much of, if at all, in children's books. So I try to put in as much detail as possible, and I give specific names for things where appropriate.

Young readers have told me that they've googled mangosteens, for example, and been surprised as they thought that it would be a version of mangoes! I love giving curious readers something to look up as it makes for a much richer reading experience, I think.

A: This book changed so much from the first draft. Two characters disappeared, two more appeared, an adult became a child, and a turtle got a starring role! With every draft the story got stronger but moved away gradually from the initial story I had. It was a pleasure to write because all the surprises in the story were surprises to me too!

A: I hope that they feel something of the wonder of nature as they read. I would love for them to feel deep inside them how magnificent our sea creatures are; the majesty of giant blue whales, the elegance of leatherback turtles, the playfulness of arcing dolphins.

Not to mention the sea itself and all the treasures within. I remember going snorkeling and being stunned to see coral in all colours of the rainbow. It was like a whole other world below the water.

A: Another book with a wonderful animal and intrepid child adventurers!

A: My next book comes out next year, and it features a mysterious and elusive spotted animal.