Bud Smith is the author of the new novel Teenager. His other books include Double Bird, and his work has appeared in a variety of publications, including The Paris Review and The Believer. He works heavy construction and also is a creative writing teacher and editor. He lives in Jersey City, New Jersey.

Q: What inspired you to write Teenager, and how did you create your characters Kody and Tella?

A: I wanted to write about America through the eyes of youth, just breaking away from their parents, and then society at large. I was after reckless beauty, and tears and laughter. I wanted to have a strange adventure through chaos to find love and understanding.

One day I was looking up at a water tower looming over the Pine Barrens of New Jersey where I was raised and I thought for a moment I saw a shadow standing up there looking down. It was just my eyes playing tricks. The more I thought about the shadow looking down, he began to appear to me. A young man in love, looking to see if his girlfriend had come home from school.

A lot of my stories begin like this. Something just triggers something, usually a misunderstanding in real life. And I just keep thinking about the logistics of the misunderstanding.

Why would this boy be on a water tower looking at his girlfriend’s house? Oh he’s just making sure her parents aren’t home so he can sneak over there and see her for a while. But wait, what if he was waiting for the parents to come home. That seemed more interesting. I didn’t know why he was going to see them yet, but by the time he’s climbed down the ladder, I knew the car was stolen and the ignition was weird. I knew he had a gun.

So you just send him down the road and see what kind of person he is. See what he has to say. I’m always surprised where it goes. That keeps it exciting for me. I generally write without any big plan, without an outline, but I do think about the scene that’s coming next.

I wanted to write this story about people becoming themselves, one mistake after another, in a big wild country that gives them the freedom to make these mistakes. But I wanted them to have this deep compassion for each other, and sweetness, and truth in their desire to be together in a place that has rejected them. They create their own little world, out on the open highway, holding hands through the roadside attractions.

Q: The Kirkus Review of the book says, “Smith has mixed violence with fable to create this modern-day tall tale about two teens who love each other and say to hell with everything else.” What do you think of this description, and do you see the novel as something of a fable? 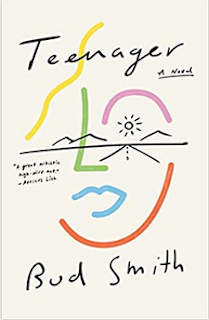 A: I agree with that assessment. This novel is a realist novel that slips in an out of hallucination and the character’s personal fantasies. But I think of these characters as rooted in an American folktale, echoed through the years. They are people I know and yet at the same time they are Calamity Jane and they are Paul Bunyan.

They are just average citizens of the land who have gotten the land wrong in one sense, but who understand and believe in each other and set off, careening, and sparking, romantically, as all the larger-than-life heroes of my understanding ever have.

I felt strongly that for everything the main characters get wrong along the way, just like anybody, they got a lot right. All the while knowing how it all would end for them too. Violence begets violence in the real world. It was the same here.

The goal for them was to just get to spend some time together before it all came crashing down around them. Kody says he’s considered the consequences, jail, death, Hell, and he’s fine with all of them. Time with her (Tella Carticelli) is all he cares about.

Q: Do you have any other favorite road-trip novels?

A: Norwood by Charles Portis, and also his novel Dog of the South. They are extremely funny, sharply written. They are full on proper, driving the highway books. Don Quixote is perhaps the greatest road trip novel. If we’re on some kind of wild quest, I’m happy. But maybe I’m even happier when it’s a fool’s errand.

In Norwood, the narrator is going on an odyssey on a series of busses all to chase down $75 he lent someone in the Korean War, all because he doesn’t want to be around the house dealing with his sister. Don Quixote has read one too many books on chivalry and has decided to become a knight and launch off on an epic journey with his friend Sancho.

That’s all I really need. Two people who want to be together, and the open road between them. But please make me laugh, and please break my heart, and please help me make sense of the adventure of my life.

A: Oh I don’t know. I work construction and I do the initial drafts of my stories, poems, and novels, on my cell phone in the machine shop of a large petrochemical plant, where I work as a welder, rigger, mechanic, in a labor union. Or I write the stories in one of the work trucks if it’s too loud in the machine shop, somebody else working through coffee break or lunch to get something critical done.

Writing stories is the most fun I ever have. Hands down. I do it for joy, even if the subject matter is rather dark. And I’d like to say, if anyone is curious, many of my short stories, and links to other books, are collected on my website, coolgoodluck.com.