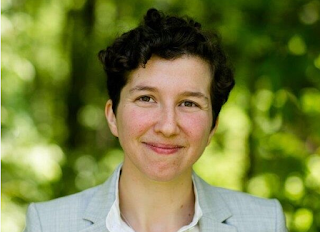 Rachel Sharona Lewis is the author of the novel The Rabbi Who Prayed with Fire. It's an updated version of the classic Rabbi Small mysteries by Harry Kemelman. Lewis is a community organizer, and she lives in Watertown, Massachusetts.

Q: Why did you decide to write an updated version of Harry Kemelman's Rabbi mysteries, and how did you create your character Rabbi Vivian Green?

A: It wasn’t in my life plan to write mysteries or fiction of any kind. But a few years ago, I was at a sale where books were spread out, and my eye caught Friday the Rabbi Slept Late. It turned out there was a whole series.

I was enthralled by the world Kemelman created. It was familiar to me—about a rabbi at a conservative shul. The books were talking about themes and ideas I had never seen in a mystery before. I bought the whole series and read them.

They were a product of their time, but Kemelman really used a sense of mystery to explore questions for the Jewish community of his time—assimilation, the role of a rabbi, how the community reacts to shifts in the moment. The books dealt with feminism and the civil rights movement. I was not on board with all the choices Rabbi David Small makes.

At some point I thought someone should do a version of the books today, with a contemporary feminist rabbi. Rabbi Vivian Green is a young queer rabbi who could explore questions of the moment with a backdrop of mystery. I started to write some scenes.

I had grown up in Jewish institutions, and for the past 10 years have worked with synagogues on social justice issues in the Boston area. A lot of the characters are composites of people I’ve known. I’m working on the second novel.

Q: The novel is set in Providence, Rhode Island. How important is setting to you in your writing? 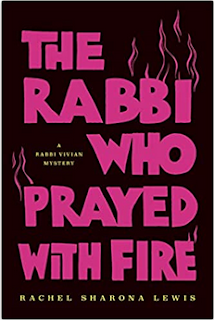 A: Because I was new to writing, I knew the setting was a choice: I could make up a new place or use a place that actually exists. For me, it felt too daunting to create a whole new city-world. I wanted to set it in a place I knew and could work with.

A: I knew the general skeleton, what the main tension points would be, who the characters were, and the ending very generally, but I didn’t have the plot points developed along the way. Over time, a lot of new pieces got worked out—that’s where writing the book was taking me.

For me as a new writer, it was less intimidating to have a general idea of where I wanted to go, but a willingness to diverge from that.

Q: The novel deals with a variety of issues, including police violence, racism, and antisemitism. How timely did you seek to make the story?

A: I was writing a book without expectations that it would even be a book. I was using the writing to work through questions I had about the Jewish community. It was timely—I was responding to questions through the process of fiction writing.

As the drafts went on, something would happen. In between the first and second drafts, the Tree of Life shooting happened in Pittsburgh. I needed to take more seriously the idea of the fire at the shul being an act of antisemitic violence. Between the second and third drafts, another shooting happened. I needed to change the characters’ reactions to reflect what was really happening.

I thought I had finished by January 2020, but then the last part of the editing converged with the murder of George Floyd and the uprising against violence against Black people by police. I ended up shifting one scene to reflect the moment….that was a moment where I was influenced by what was happening, and my own grappling with what’s going on in our society and relations between the Black community and the Jewish community.

A: I hope people don’t read this as a prescription for anything. What’s amazing about fiction is that every person’s life and community is different. From that we can try to recognize the questions that apply to all of us. One question in the book involves what’s our community, and what are the costs to meet some members’ needs but not all? What could it look like to meet the needs of all? I hope people take the questions away more than the answers.

Q: You said you were working on a second book—can you say more about that?

A: It’s another Rabbi Vivian book that takes place a few years later. A hurricane is on the way to the city, and there are robots! The questions relate to the way the community is committed to Israel.