Margarita Engle is the author of the new middle grade novel in verse Singing with Elephants. Her many other books include Your Heart, My Sky.

Q: What inspired you to write Singing With Elephants, and how did you create your character Oriol?

A: I wanted to write about a grieving child who finds a refuge in the musical language of poetry, and also discovers that her voice is powerful when she becomes part of a community of activists defending animals.

Q: Why did you include a figure based on the poet Gabriela Mistral in the novel?

A: I was inspired when I learned that Gabriela Mistral lived in Santa Barbara, California, after World War II, shortly before my mother immigrated to the U.S. from Cuba. I wondered how a child might be influenced by a neighbor who happened to be the first Latin American recipient of a Nobel Prize for Literature.

To this day, Gabriela Mistral is still the only Latin American woman who has received that honor. She is an amazing role model for young people, because she was also an educator, peacemaker, diplomat, and defender of animals, children, and nature. 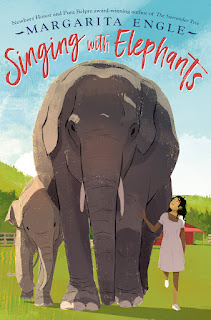 Q: The Publishers Weekly review of the book says, “Employing immersive free verse that conveys themes of compassion, friendship, justice, and vulnerability, Engle captures how inexplicable Oriol’s grief feels, encasing it in a powerful, charitable, and brave young voice.” What do you think of that description?

A: I’m grateful to see that the reviewer understood my intentions. It’s a lot to tackle in one story, but apparently I succeeded in blending all those varied themes!

Q: What do you think the book says about the connections between humans and elephants?

A: We can learn so much from the love and loyalty that elephants demonstrate within their own families. Humans need to expand our ideas about heroism to include the unique sensitivity and intelligence of other species.

A: I have several picture books pending, and my next two young adult verse novels are companions to Your Heart, My Sky. Like that book, they are love stories combined with environmental themes.

A: I would like readers to know that poetry makes me happy, and I hope they will also find joy and solace in the musical language of verse.