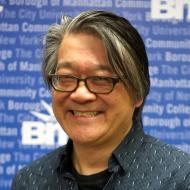 Alvin Eng is the author of the new book Our Laundry, Our Town: My Chinese American Life from Flushing to the Downtown Stage and Beyond. A playwright, performer, and educator, he is based in New York City.

Q: What inspired you to write Our Laundry, Our Town?

A: The narrative foundation for Our Laundry, Our Town began on stage as two solo performance pieces, The Last Emperor of Flushing and The Flushing Cycle. These works were developed and performed in NYC at the Pan Asian Repertory Theatre, Queens Theatre in the Park and Dixon Place.

The Last Emperor of Flushing was also the first work I wrote after the passing of my mother and second parent. With both parents no longer living in this realm, I sought to create a work that chronicled the hardships and challenges that they and our family faced.

My parents had an arranged marriage in a farming village outside of the port city of Toisan in the Pearl River delta region of the southern Chinese province of Guangdong. They were both illegal immigrants who had to circumvent The Chinese Exclusion Act and the Cold War McCarthy-era red scare environment.

How this was absorbed into the lives and dispositions of my four siblings and myself is a big part of this memoir and my wanting to share our story on the print page for posterity.

Q: The playwright David Henry Hwang said of the book, “Powerful, funny at times, and consistently inspiring, Our Laundry, Our Town turns one artist’s journey into the story of AAPI communities and emergence of a movement over the past half-century. Alvin Eng’s engaging memoir looks back on the past to envision a better future.” What do you think of that description?

A: In many ways, David Henry Hwang’s blurb brings my artistic journey full circle. Seeing him read excerpts from his then soon-to-debut-on-Broadway play, M. Butterfly, changed the trajectory of my life.

I was in my mid-20s and looking to transition out of the music biz and being a rock & roll fanatic that had ruled my life to date. I was also looking to re-kindle my creative life that had been dormant since my late-teen punk bands.

As David read from M. Butterfly, it was clear that I had never heard anything like this. The next day, I started seeking out playwriting courses to enroll in. It was a magical time to begin my journey as a young Chinese American playwright just as M. Butterfly was beginning its ascent on Broadway.

To have David share that generous blurb description is an affirmation of a journey that was initially inspired by his work. It is humbling that he sees Our Laundry, Our Town as being of value to future generations of AAPI artists and community leaders.

David and all of those who generously offered blurbs were not “just names” sought out for promotional value, they all impacted and inspired my artistic journey.

Q: Did you need to do any research to write the book, or was most of it written from memory?

A: Yes, most of it was written from memory. Through this writing process, each discovery or “answer” generated many more questions about our family history and how it related to the larger narrative of our times.

Thus, after finding the initial prose shape and scope, I conducted research on all of the related Chinese and Asian American history––and even NYC history––drawing from numerous sources and archives.

I also researched our family history by interviewing friends and relatives… some of whom I hadn’t spoken to in years. 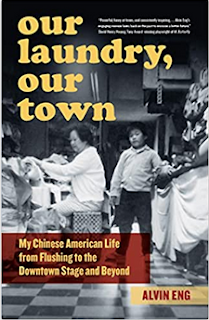 A: The title reflects the parameters of my journey so far.

Our Laundry draws on my childhood and adolescence growing up in my family’s Chinese Hand Laundry––as well as the labor and activist history of the Chinese Hand Laundry Alliance and other organizations that paved the way for my parents and our family.

One aspect of the Our Town part of the title reflects how this is also a NYC memoir with deep dives into the 1970s punk rock world and the “Gorgeous Mosaic” 1990s downtown performance art and theatre scenes.

Another aspect reflects how, as a theatre practitioner and professor in the 21st century, learning of the seldom-discussed Chinese influence on Thornton Wilder’s seminal Americana drama, Our Town, became the unlikely catalyst for a psyche-healing pilgrimage to Hong Kong and Guangzhou, China.

This discovery led to conducting an Our Town-themed Fulbright Specialist devised theatre workshop residency at City University of Hong Kong.

In conjunction with this residency, the U.S. Consulate, Guangzhou, invited me and my wife, director/dramaturg Wendy Wasdahl, to conduct theatre workshops and stage a performance of my autobiographical monologue, The Last Emperor of Flushing, in my family’s ancestral Guangdong province.

Growing up in the 1970s shadows of the Cold War in one of the few immigrant Chinese families in Flushing, I never imagined that I would ever set foot in China let alone write and perform a monologue play about my family there…in English. The world moves in mysterious ways. (Sounds like a song.)

A: I am currently completing two works for the stage and one brand new project that can be for either the stage or the page. Concurrently, I am also seeing if there may be interest in adapting my memoir into a film.

For the stage, I am workshopping and completing 33 & 1/3 Cornelia Street, the second of my Portrait Plays series of historical dramas about artists.

33 & 1/3 Cornelia Street will be published next year by No Passport Press.

Last year, my first Portrait Play, Three Trees, which explores the haunting relationship between sculptor Alberto Giacometti and his primary muse/model of the 1950s, Isaku Yanaihara, was also published by No Passport Press.

Before the shutdown, I was in the midst of a Workshop Residency at Dixon Place for a new solo “acoustic punk raconteur” work, Here Comes Johnny Yen Again (or How I Kicked Punk).

The piece explores the impact of opium and the Opium Wars on the Chinese Diaspora as well as NYC’s punk/counterculture through the dual prisms of William S. Burroughs’ character, “Johnny Yen”––immortalized in Iggy Pop & David Bowie’s ”Lust For Life”––and my own grandfather’s opium overdose on the streets of NYC's Chinatown.

I am writing new songs and monologues for this piece.

I am also in the very beginning stage a of a new work that’s tentatively titled the AARP (Asian American Rock Party) Presents a One-Night Reunion of G.O.D. (Goddess of Democracy).

For the page or the stage, this is a meditation on the axis of activism, history, music, and memories as told (chanted, ranted, and sung) from the perspective of “Goddess of Democracy,” a fictitious early 1990s Alternative Rock band formed in the wake of the 1989 Tiananmen Square uprising.

They are reuniting in middle-age in response to personal tragedy and the 2019 Hong Kong uprising.