Beatrice Hitchman is the author of the new novel All Of You Every Single One. She also has written the novel Petite Mort. She is a lecturer in creative writing at the University of Brighton in the UK.

Q: What inspired you to write All Of You Every Single One, and how did you create your cast of characters?

A: I was inspired by reading a story about the wife of renowned miserablist Swedish playwright August Strindberg, who allegedly had an affair with a woman during a crisis in their marriage. At the time, Strindberg and Mrs. Strindberg were living all around Europe.

I'm a big fan of his nihilistic, darkly romantic work, and I was drawn to this real-life question about his life, and the untold story of his wife's experience - we never get to hear from the women, do we?

At the same time, I was revisiting some of Freud's work, and was reminded of his case study Dora - another one where we seem to get to hear about the woman's experience only from the men around her. And so I thought: what if, what if, these two characters, Mrs. S. and Dora, somehow intersected?

The question of Europe was also in the mix. When I started writing the book, we were lucky enough to spend lots of time in Europe - this was pre-Brexit - and so I was thinking about the ways that this sense of Mitteleuropaischness (or Nordeuropaischness, I suppose) could be brought to life.

A: I spent some time in Vienna, but not as much as I'd have liked. Research-in-situ is important to get a sense of how the built environment and natural, social, cultural environments intermingle. But I really focused on literary representations of Vienna, which I think are what most people base their cultural understandings of a place on, anyway.

I have to say, I was surprised, and horrified, by the way the net closed so swiftly on Jewish people living in Vienna after the Anschluss in 1938. 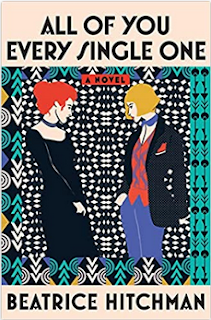 I think one may sometimes think, when looking back at apocalyptic episodes in history: “Why didn't people run?” But now I understand that the systems seemed to close in throughout that year, in such a way that escape itself was foreclosed as an option. I had been naive to think otherwise.

A: The book's title comes from a line in the book. Frau Berndt, everybody's favourite landlady and mother hen to the main characters, says expansively one evening that all of her tenants are her children, every single one. I was thinking a lot about what constitutes a family while writing, and I was drawn to this idea of non-biological ties.

The title also gestures to the interplay of the individual and mass populist moments, such as, unfortunately, the rise of Nazism that we see in the second half.

A title should be both a threat and a promise: so I like to think it's both an invitation to expansiveness and also, somehow, contains the seeds of something darker.

Q: In a review of the novel for Women.com, Abby Cunningham says, “A touching and atmospheric ode to queer characters and their struggles during such a poignant time in history, we can guarantee you won’t put this one down until it's finished.” What do you think of that description?

A: I'm delighted by her assessment. I wanted the book to be both a celebration of queer persistence and queer family, and hopefully a page-turner, so I'm thrilled.

A: I'm writing a novel set in France in three different times: 2005, 1940, and about 40,000 BC. My study is full of pictures of Neanderthals and books about pre-human art - it's on its way to becoming a cave, in fact. The novel promises to be either intricate and technically rewarding, or completely bananas. I just have to keep going so I can find out which.

A: I'd be remiss if I didn't mention the absolutely gorgeous cover. It's an adaptation of a design by Moser, but made far more inclusive and representative of the characters in the book. A career high.