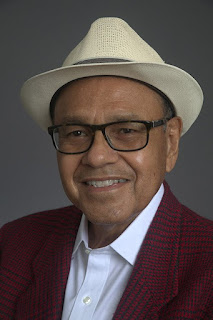 Antonio Salazar-Hobson is the author of the new memoir Antonio, We Know You. He is a longtime labor lawyer.

A: I wrote my memoir, Antonio, We Know You, in 14 months during the pandemic. My title comes directly from Cesar Chavez expressing his trust in me when I asked him for a critical  favor that would allow me to finance my education.

I wrote this book to be a model of survival, perseverance, hope, and the ability to emerge after a difficult and brutalized childhood as a trafficked young boy.

My ambitions since a child never changed once kidnapped. My sole task was to endure long enough to find my family with the inner strength and determination that my mother gave me during the first 4.5 brief years I was with her.

I wrote Antonio, We Know You to provide a legacy for my family, to honor their dignity and hard work, and to honor my mother Petra’s love. Without her early love, which taught me how to love, I would not have survived to make my journey home.

My book is about my successful search for family reunification. Although my journey was at times very difficult, it was made bearable by my insistence that I find my family, particularly my mother Petra, hoping she would still be alive. When we reunited in June of 1983, 24 years after the kidnapping, my dreams of meeting my mother and family were realized.

I also authored the book to provide a model of hope for abused children, both those currently being abused and survivors of abuse and trafficking. It has a core message of resilience and love, to hold on to your essence until you can break free from your abusers. My messages are that it was never your fault, that you can still hope and find love in your adult life and that you shouldn’t give up on your dreams because of what you suffered.

Q: What impact did Cesar Chavez have on your life?

A: Cesar Chavez changed the entire trajectory of my life. I met him after my third year of picking fruit in the Central Valley. I was 15, attending a labor rally with other students, where we met with him at length for pre-rally introductions. He shook my hand and gave me five minutes to explain my background. I told him about the poor working conditions in the fields where I worked and that I wanted to help improve our lives.

I became a lifelong supporter of the UFW, attending countless rallies with other student bodyguards. After the first year, Cesar took me aside and said, “Antonio, you should become a labor lawyer for unions. Antonio, you can do that.” I never looked back. Cesar had given me a purpose.

With Cesar’s direction and inspiration, I became a union and employee-side labor lawyer for 35 years. I was with Cesar and  his followers until his death, following his guidance. Over my career I helped build many labor coalitions for labor unions where the UFW was a dominant player. I represented large international unions for the entire period.

Q: You describe many horrific experiences--what impact did it have on you to write this memoir?

A: I decided to tell the truth of what actually happens to an abused child.

I specifically limited the more graphic sections to only a few pages, but I felt that the audience needs to know what actually occurs when a child is abused, drugged or sold for months at a time. This is what occurred to me at the ranch for three years in a row, where for all three summers, from ages 7-10, I was sent alone to be trafficked and used by men.

I frankly did my best to “fade to gray” in every abuse and trafficked scene. I had already determined not to write about the daily horrors of abuse because it would overwhelm the reader.

I decided to write about the abuse with limited descriptions but set out in enough detail to let people learn about the real scope of child abuse and what we endure as a community. My story is about the realities of what being a trafficked child actually experiences in real life.

Although writing about the truth of what happened to me was difficult, I was determined not to stop until my book of hope and perseverance was completed.

I had a family legacy to write and protect, as well as serving my own community. I survived in part because of great pride in my culture, always wanting to return to a Chicano environment. I knew that I was capable of writing a hopeful book that would be helpful to my people and to the abused and trafficked community.

I also wanted readers to understand the uniqueness of my experience as a Chicano child with a white pedophile couple who perpetrated their actions with complete impunity.

Had I been a white child, significant resources would have been used to find my kidnappers. Since we were a poor, monolingual migrant family, no search was conducted to find me by the Arizona Police Department.

Q: Can you say more about what you hope readers take away from your story? 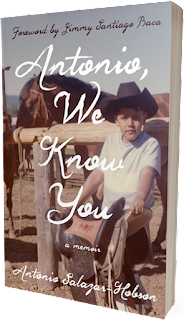 A: The focus of my book is a successful and joyous family reunification against the backdrop of early childhood abuse.

I want the reader to see the hope, love, and perseverance of my story. It is not meant to be a book about abused children, Instead this is a backdrop to the successful journey of finding my family and my subsequent 40 years being with them.

This is the only known memoir about kidnapping and trafficking of Chicano children taken by white pedophiles and where I eventually survive and thrive. The book could not have been written without the truths it reveals.

To my knowledge and that of my publisher, agent, and public relations firm, there is no similar book that has been written, particularly from a Chicano perspective. Neither is there a book where Cesar Chavez changed the life of a young boy looking for a leader who gave him the idea that he really could become a labor lawyer. I hope Chicano readers find the book resonates with them.

The reader will find that I followed through with Cesar’s dreams for me. I worked for 35 years in the labor movement for large international unions, such as SEIU, and the CWA (Communications Workers of America). I also represented tribes from California to the Southwest and members of the Sioux Nation for nearly 25 years.

I did all that Cesar asked and expected of me. My memoir about Cesar saving my life is unique. Cesar saw a potential in me that I was too young to see, concluding that I had a ready mind and I could serve El Movimiento or La Causa. I hope the book adds to the stories of Cesar’s legacy.

A: I am working on additional short stories about my family.

My hope is to also write a few articles or opinion letters related to the broad issues raised by my memoir.

My writing will continue my goal of participating in the national discussion regarding child abuse, trafficking, and the unique racism that children of color daily face.

I hope to contribute to the national discussion on Chicano issues in this book such as our poverty and inadequate health care (four of my siblings died of Covid last year in Phoenix).

Through my writing I also hope to focus on how historically the parents of abused or trafficked children of color have received virtually zero police support for  finding their child, unlike white abducted children. Once again, had I been a white child, I would have been found.

I believe that the recent victories (Maxwell/Epstein) for abused and trafficked children are the first signs of legal hope for our abuse-survivor community. I hope that the well over $1 billion in settlements, with more forthcoming regarding abused children and athletes, has finally brought this hidden subject to the public eye. My future writing will be part of this conversation.

I want to use my writing and public appearances to add to the surge in media coverage on these issues. It is a profound sea change for our country. Due to the near constant news media coverage, there is increasingly less resistance by the public to invest in learning about these subjects, the protections we need, and the new successes we have made.

Particularly important is what religious institutions have done to change their policies with regard to harboring known abusers. They are now familiar with the massive financial liability which come with settlements of decades of known abuse. As a person of faith, I hope to contribute to these changes.

Q: I’m so sorry to hear about the loss of your siblings to Covid…

Is there anything else we should know about you or the book?

A: I am honored to be an advocate for labor and tribes. I am proud of the many victories I have won on their behalf, and I thank them for the strength they have always showed during the lengthy federal trials that we won together.

I aspire to be a model for other people of color to follow through with their dreams, fight through the racism and become what you deserve to be.

We are fully involved with our Reform synagogue in San Francisco, the fourth largest in the country (4,000-6,000 members). It is very progressive, with women and LGBTQ rabbis. We have a national reputation as a leading force on social issues within the Reform Movement. Our children have had their Bar and Bat Mitzvahs there and attended Jewish day school.

As a Chicano Jew, I am engaged with my faith and continue to take adult courses with the synagogue with my spouse, Katherine.

I have worked with the LGBTQ community for over 30 years. In 1985 I won the first transgender case in the country for SEIU, which changed City and County of San Francisco (CCSF) policy.

I served under Mayor Willie Brown for seven years as a Human Rights Commissioner (HRC), responsible for overseeing large contracts for the LGBTQ community, helping to deny many large contracts (over $100 million) to companies with anti-gay or child worker violations.

I have two degrees in Latin American Studies. One from UCSC with Honors, and one from Stanford where I attended as a Danforth Fellow. I attended UCD School of Law where I was a MALDEF Fellow, an editor of my law review and published.